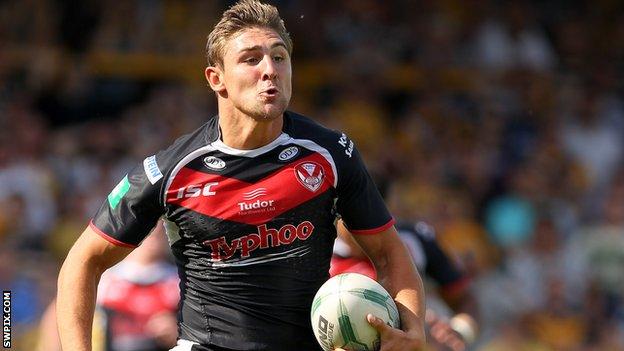 The hosts, who have now won five out of five, went ahead through Josh Jones, while Makinson's double and Jordan Turner stretched the lead to 24 points.

But Benjamin Garcia and Eloi Pelissier closed the gap to 24-12 at half-time.

Michael Oldfield's second-half brace was little consolation for the French side, who have lost all five of their matches in Super League this season.

Saints led when Jones powered over for the home side's first try, while Jonny Lomax and Turner linked up to send Makinson over.

In-form scrum-half Luke Walsh combined with Lomax to set up centre Turner to score near the right touchline and winger Makinson touched down under the posts for his second try to make it 24-0.

Catalans, who had won on both their previous visits to Langtree Park, responded with two tries in six minutes through close-range efforts from Garcia and Pelissier, while Thomas Bosc's conversions reduced the deficit to 12 points at the break.

Hohaia and Swift added further tries for the hosts, with two Oldfield scores in vain for the Dragons.

"That was probably our best win of the year when you really look at it.

"Catalan have a lot of wounded people that they weren't playing with, but to lose our blokes during the course of the game made it tough for us.

"I would have thought the scoreline would have gone a little bit more our way if we didn't have to dig through it.

"It's a good sign the boys can hang in there and push through and it's great for the spirit of the club."

"There was definitely an improvement from the last few weeks.

"Mentally we were there tonight and physically we responded against one of the best teams in the competition. It's a good first step after a very tough week.

"Tonight, the players responded with some pride because before that they were not good enough. That's what we talked about in the week, be proud when you wear this jersey, and they showed that tonight."