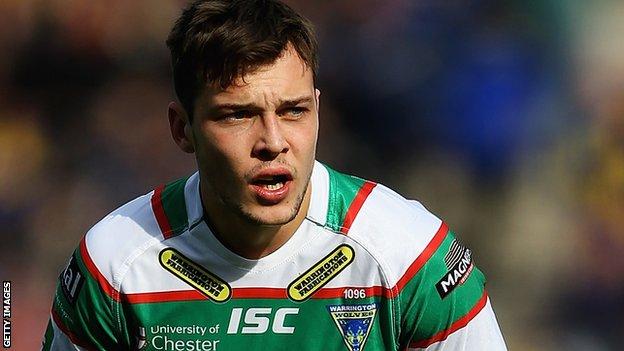 Warrington's Gareth O'Brien is hoping to avoid comparisons to Lee Briers after starting the season in the club legend's half-back role.

The 22-year-old has featured in all of the team's Super League games so far, including their first win of the season against Hull FC.

Briers, 35, was forced to retire last November because of a neck injury.

"I don't want to put that pressure on myself in the sense I'm filling those shoes," said O'Brien.

"Briersy was a legend in his own right, he was a really class player.

"He's said to me, Ritchie [Myler] and Stef [Ratchford] whenever you've got a question about anything or want to work on your game just to go to him."

O'Brien is relishing his opportunity after spending time on loan at St Helens,Castleford and Widnes in recent seasons as well being dual registered at Swinton Lions during 2013.

However, last year's losing Grand Finalists lost the opening two games of the season as they adjusted to the new-look squad brought in for head coach Tony Smith.

"It's a pretty big year and I need to be the player I know I can be and have confidence in myself and hopefully contribute to this team and winning something this season.

"I'm just looking to improve me game week in week out and that's going to come from help from Tony and the rest of the boys."