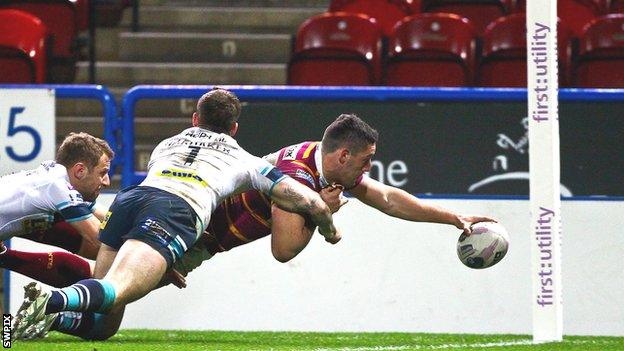 The visitors went ahead through Stevie Ward's score, while Huddersfield's Jodie Broughton's debut try closed the deficit to two points at half-time.

The Rhinos' early possession turned into a try as a good move from left to right saw Sinfield find Ward, who punched through the gap for the game's first try, with Sinfield adding the extras.

Giants thought they had closed the deficit when Jason Chan set up Scott Grix, but after video replays the try was disallowed for an obstruction earlier in the play.

Wardle was then twice denied a try - first because of a forward pass and then when he narrowly had a foot out of play.

The home side finally got on the board when a free-flowing move saw Broughton go over on the left-hand side, but Brough's kick went across the face of goal.

Brough then missed a 40-metre penalty attempt just before the break as the visitors kept their 6-4 advantage.

Huddersfield, who had won the previous five meetings between the two teams, saw another try disallowed for a knock-on, but Brough's accurate penalty brought the two sides level.

Sinfield's penalty saw the visitors take an 8-6 lead, before Luke Robinson's off-load set up Wardle for a one-handed try in the corner to put Huddersfield ahead for the first time, with Brough adding the extras.

Watkins finished off superb Zak Hardaker pass four minutes later, but Sinfield missed his kick and the chance to put the visitors ahead again.

Both sides had drop-goals attempt to win it, Sinfield failed twice for Leeds with his second attempt hitting the post, while Danny McGuire also missed.

Brough also missed two drop-goal chances for Huddersfield as the two Yorkshire rivals had to settle for a point each.

"If you can't win you want to draw, don't you? The result pales into insignificance compared to the steps we made from the previous week, though. The improvement was pretty remarkable.

"Our attention was good and for the main part we stuck to it. If you take the 10 minutes out at the start, I thought we were pretty dominant. I think we created enough opportunities to win five games.

"I just hope some week someone can press the green button instead of the red one, but you take the rough with the smooth."

"Huddersfield had a lot more momentum than us and maybe they should have got another couple of tries in the first half.

"We turned a lot of ball over and I didn't think our kicking was great, but I think we showed enough effort and work for each other not to feel bad about getting a point.

"Huddersfield are a very good team and we've not got a great record here so, in the grand scheme of things, to get a draw after a ropey performance is not bad but we have a fair bit to work on."