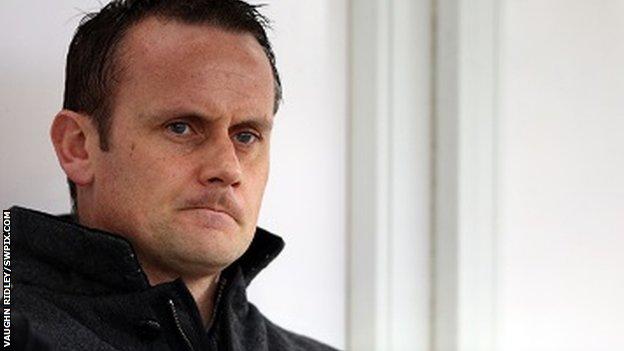 Bradford coach Francis Cummins believes the squad are capable of avoiding relegation despite being given a six-point deduction by the Rugby Football League for going into administration.

The points loss prompted proposed new owners Bradford Bulls 2014 Ltd to pull out as they considered relegation to be "almost a certainty".

The Bulls are currently bottom of Super League.

"I don't agree that we're going down," he told BBC Radio Leeds.

"We could be back on an even keel next Friday. We've got London this week and then we go to Hull FC next week and if we win both of them we'll be back to zero.

"I'm confident that if I can keep this group together and I'm able to bring a couple of loanees in then we will have a great chance.

"It is a challenge I am very much up for."

Bradford have won one and lost one of their opening two matches but the deduction now leaves them four points adrift at the bottom of the table, with two teams to be relegated this season.

The Odsal side were placed into administration for the second time in less than two years on 31 January after OK Bulls Ltd, the club's former holding company established by previous owner Omar Khan, entered administration.

With the collapse of the proposed takeover, the club are now back in the hands of the administrator.

Despite the ongoing uncertainty at the club, Cummins has no intention to leave his position.

"The players are frustrated about the situation just as I am," he said.

"It's not crossed my mind to leave because we have a great bunch of lads here.

"If they weren't bothered and they weren't interested then it might be time for us to throw it in. My job is to make sure that we make a good job of this."