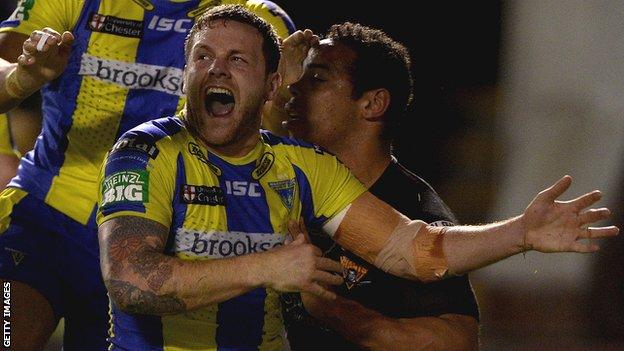 Warrington's Simon Grix will be out of action for "a number of weeks" with an ankle injury suffered in training, coach Tony Smith has confirmed.

The versatile loose-forward, 28, was a try scorer in Warrington's Grand Final defeat by Wigan Warriors in October.

"It's really unfortunate for Simon because he's just got himself back from a shoulder injury," Smith told BBC Radio Merseyside.

"He played really well last week [at Leeds] and we're disappointed for him."

The Wire, who have lost the Grand Final at Old Trafford in each of the last two seasons, have begun the 2014 campaign with consecutive defeats against St Helens and the Rhinos.

"It's very unusual and we're not used to this," said joint-captain Ben Westwood.

"We've played against two top-quality sides, and we were better against Leeds than we were against St Helens, but we're not quite up to where everybody expects us to be and where we expect ourselves to be.

"It's only early in the season and if we can improve again this week [against Hull FC on Sunday] we won't be far off."