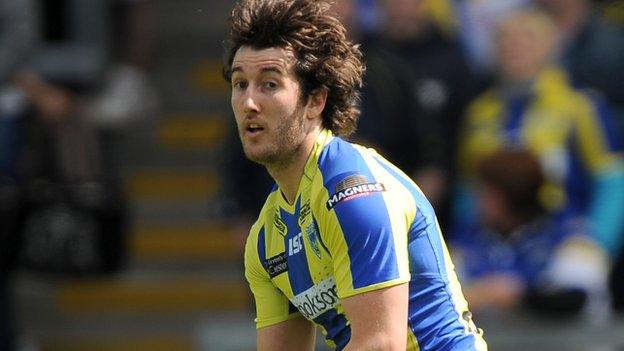 Warrington survived a Hull fightback at the Halliwell Jones to earn their first Super League win of the season.

Trent Waterhouse and Ben Evans then went over, Ratchford slotting three kicks, including a crucial penalty, to put the hosts 18-6 up at the break.

Tom Lineham crossed in the corner for Hull before Aaron Heremaia put Fetuli Talanoa through with a cut-out pass late on, but it was not enough.

Much-fancied Wolves, beaten Grand Finalists in 2012 and 2013, have not got off to the best of starts, a heavy opening loss to St Helens having been followed by a 18-12 defeat at Leeds.

This was Hull's second successive reverse, after beginning with a narrow 36-34 victory against Catalan Dragons.

Ratchford opened the scoring for Warrington after just five minutes, scrum-half Richie Myler putting a clever sixth-tackle grubber kick through for the full-back, who then made it 6-0 by converting his own try.

But Hull prop Mickey Paea muscled the visitors close to the line, from where Houghton darted over, Ben Crooks adding the extras to level.

After sustained pressure on the visitors' line, Micky Higham put through Waterhouse to restore the Wire's advantage, before Ratchford broke brilliantly out of defence to run 60 metres.

Jamie Shaul did well to stop the Warrington full-back, only to then be sin-binned for holding on too long in the tackle.

Down to 12 men, the Black and Whites' defence was again breached before the break, Evans winning the race to ground Gareth O'Brien's kick. And Ratchford then teed up the conversion before his 30-metre penalty carved a 12-point half-time lead.

After the break, Shaul was denied by a try-saving Joel Monaghan tackle. But Lineham then ensured that Warrington did not add to their lead when the sheer force of his challenge forced the ball from Gene Ormsby's grasp as he looked to cross in the corner.

Instead, slick passing from Joe Westerman and Richard Horne created room for Lineham to go over for Hull's crucially unconverted second try on 61 minutes.

Horne and Wolves' Roy Asotasi were both held up on the line as both sides searched for a vital late try. But, although Talanoa got it for Hull, eventually touching down three minutes from time, Crooks this time converting, there was no time for another score.

"It was a tough old game played in tough conditions and we had to stick with it. We controlled it pretty well for much of the game.

"We had a few defensive slip-ups, but again it was a big improvement. It took a lot of resilience on your own goal line from time to time and we did that.

"We have improved again and our kicking game in the first half was terrific and that part of our game in the conditions was crucial.

"Some of our boys who have been well out of form had good solid games and that makes a big difference."

"Our first-half performance has probably cost us victory. We strung together a top-quality 40 minutes in the second half. But we need to realise that, if we put it together for longer periods, the better chance we are going to give ourselves.

"Defensively, we were really poor in the first half, but we defended our try line magnificently in the second half so it gives us something to build on.

"Warrington are a difficult team to defend against when they are on the front foot. But the players are frustrated with themselves because like last week against St Helens we have fronted up and come away with nothing.

"The positives are that they are difficult grounds to go to and we haven't been far off. The negative is we are just falling short at the moment."