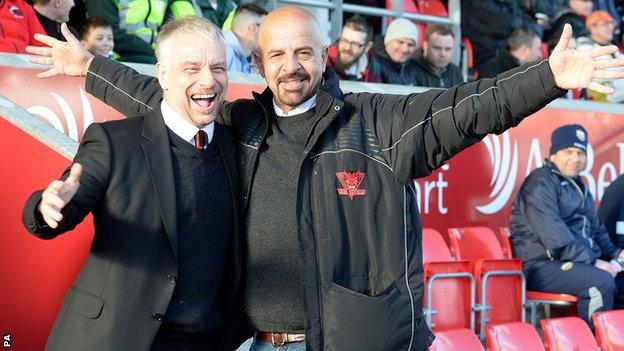 Brian Noble says Salford have shown the strength within their squad by winning their first two Super League matches.

Noble's side thrashed London Broncos 44-18 on Saturday, after making several changes to the team that had scraped past Wakefield six days earlier.

"We're still growing together as a team, and the more time we get together, the better we'll be."

Rangi Chase and Junior Sa'u - two of the 14 new signings financed by ambitious owner Marwan Koukash at the end of last season - were injured for the trip to The Hive, while veteran forwards Tony Puletua and Adrian Morley were rested.

And Salford encountered more injury problems once the game got under way.

"Darrell Griffin and Shannan McPherson went off, Jake Mullaney picked up a knock and we had to roll around our substitutions, but I think in the main we were very strong," added former Great Britain coach Noble.

"We made changes. It's good for our squad and shows we've got competition for places.

"Putting players back in the team at the right times and making sure everyone else is up to speed with what they've got to do is very important for us if we want to be successful."

England half-back Chase, who suffered a leg injury in the 18-14 success against Wakefield, should be fit to face St Helens on Thursday, while centre Sa'u "has a 50-50 chance" according to Noble.