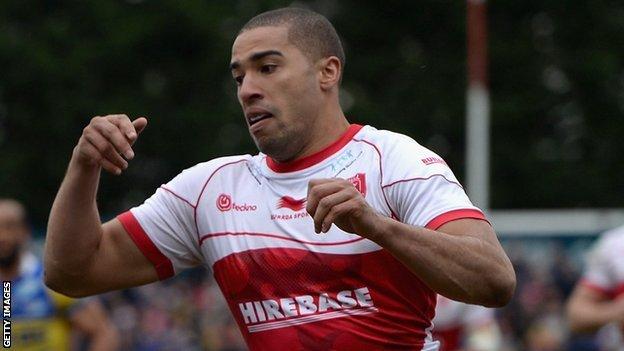 Hull KR came from behind to earn a dramatic late draw at Huddersfield.

The Giants led 24-6 in a first half which featured a 26-man brawl, three sin bins and a game-ending injury to Jamie Langley.

Danny Brough, Luke Robinson and Kyle Wood crossed for Huddersfield, with Brough adding four kicks, while Omari Caro went over for the visitors.

Jordan Cox cut the deficit and Rovers drew level thanks to late converted tries from Josh Hodgson and Caro.

The players have had a spray. It won't happen again because, if it does, there will be changes, simple as that

Rovers were looking for their first points of the Super League season, after last weekend's defeat by Leeds, against a Giants side who beat champions Wigan in their opener.

Brough opened the scoring, touching down out wide, and soon his side were 10-0 ahead when England second-rower Brett Ferres supplied a superb pass to scrum-half Robinson for the first of his two tries.

A brawl on the pitch resulted in Huddersfield's Jason Chan and Rovers' Justin Poore being sin-binned, and Giants centre Joe Wardle followed soon after for holding down Kris Welham.

But Rovers failed to make the extra man count, as hooker Wood twisted out of the tackle to touch down Huddersfield's third, with Brough adding his second conversion.

The game was then held up for around 10 minutes while Langley was treated on the pitch for a leg injury, and the loose forward was carried off on a stretcher.

Once play resumed, Hull KR closed the gap when substitute Adam Walker created the space for winger Caro to go over at the corner.

Travis Burns kicked the touchline conversion but skipper Brough added a penalty and the extras to Robinson's second try, which came from a break by substitute Ukuma Ta'ai.

That was to be the last of Huddersfield's points, as Hull KR hit back.

Four minutes into the second half, Cox stretched out for the line to register his side's second try and Burns added the goal.

Giants had two tries disallowed in quick succession and all the action came late in proceedings.

Hodgson touched down three minutes from the end after full-back Greg Eden's high kick caused confusion in the Giants defence, and there was just enough time for Caro to touch down after a 60-metre sprint.

Burns kept his cool to convert and earn his side a point.

Huddersfield coach Paul Anderson: "It's about attitude. In the first half we scored points for fun and at times I thought we embarrassed Hull KR.

"But at some point in that game we made a decision to stop working hard together. The one-out carries and stuff like that are not acceptable.

"They are not Giants-like and they will not be tolerated. The players have had a spray. It won't happen again because, if it does, there will be changes, simple as that."

Hull KR coach Craig Sandercock: "The second half was very pleasing. I don't think any other team will come here and get a point after trailing 24-6.

"I was very disappointed with our first half but I have to commend the players for their second half. It shows there is a bit of self-belief there.

"We showed some good desperation and we had some good luck go our way for a change."