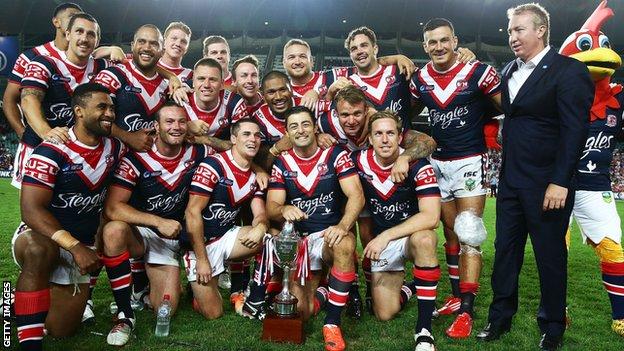 Michael Jennings scored a hat-trick as Sydney Roosters won the World Club Challenge for the third time with a resounding victory over Wigan Warriors.

Prop Sam Moa scored in between two Jennings efforts as the Australian side dominated the first period.

Wigan battled after half-time and reduced the deficit with a try from Joe Burgess and two from Josh Charnley.

But Jennings crossed for his third try, with Jared Waerea-Hargreaves and Shaun Kenny-Dowall also going over.

The game - an annual fixture played between the Super League champions and the winners of Australia's National Rugby League - was staged down under for the first time since 1994.

Wigan missed out on a record fourth World Club Challenge victory. The Warriors, Sydney Roosters (once as Eastern Suburbs), Leeds Rhinos and Bradford Bulls have all won the competition three times.

On that occasion, Wigan defeated Brisbane Broncos, but despite being comprehensively beaten this time, the Cherry and Whites can take heart from a battling second-half performance at Sydney's Allianz Stadium, as they attempted to win a record fourth World Club Challenge.

Skipper Sean O'Loughlin, who led the side to a Grand Final and Challenge Cup double last season, was declared fit to start but was unable to inspire his young side to victory against a rampant and ruthless Roosters outfit, whose James Maloney converted all six attempts at goal.

It looked like being a long evening for the English side from the off, as Trent Robinson's men went ahead after just four minutes. Aided by poor Wigan defending, Jennings fended off Charnley before waltzing through to touch down.

The Roosters were clearly on top and scored again soon after as former Hull man Moa broke the defensive line to touch down underneath the posts. Captain Anthony Minichiello, who played in his side's last appearance in this match in 2003, could have extended the lead further, but fumbled when attempting to collect a kick.

The Warriors were under constant pressure and were failing to deal with the speed of the Sydney backs, who were working off a tough and bulky forward line which contained Kiwis Sonny Bill Williams and Waerea-Hargreaves.

And when Matt Bowen, signed to replace Sam Tomkins at full-back, failed to deal with Jake Friend's grubber kick into the in-goal area, Jennings reacted quickest to grab his second try of the game.

Eddy Pettybourne was placed on report after catching Kenny-Dowall on the chin with his forearm as the visitors went in at half-time 18-0 down.

Wigan made the perfect start as they attempted to overhaul the deficit in the second half with winger Burgess, who scored four tries in a warm-up game against New Zealand Warriors, finishing off a sweeping move on 43 minutes.

But just when it looked as though they were getting back into the game, a sloppy pass allowed Jennings to pick the loose ball unchallenged and snatch his hat-trick.

But Waerea-Hargreaves, who played in New Zealand's World Cup final defeat by Australia in November, barged over before Kenny-Dowall's score ended the contest.

Sydney Roosters captain Anthony Minichiello: "At the end of last season, we spoke about wanting to win the World Club Challenge. It was a bit rusty at stages but we got the job done. We prepared well and we did a lot of video work on Wigan, because they are a great team."

Wigan Warriors captain Sean O'Loughlin: "It was a massive effort. We've come up against a world-class team. We didn't do ourselves justice in the first part of the game but we fought well. We just caused them some trouble but we just didn't do it for long enough."