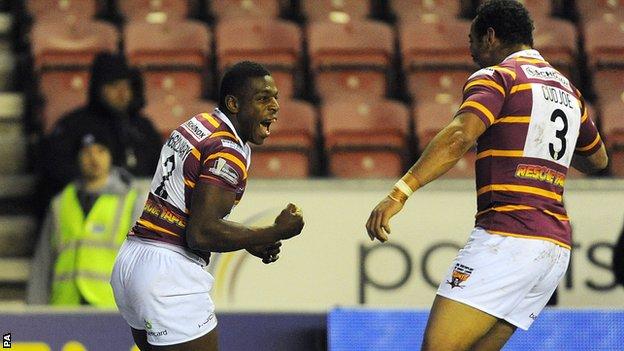 The Giants, winners of the League Leaders' Shield in 2013, led 12-0 with a Brett Ferres try and two from winger McGillvary putting them in control.

Iain Thornley and Joe Burgess brought Wigan back into contention.

But McGillvary crossed again and a late effort from Scott Grix sealed the visitors' victory.

The first game of the campaign, brought forward a week because of Wigan's involvement in the World Club Challenge in Sydney on 22 February, pitted last year's Super League and Challenge Cup winners against a Huddersfield side that topped the league table to claim the other major domestic trophy on offer last term.

Jermaine McGillvary scored one of Huddersfield's seven tries at Langtree Park last February as the Giants thrashed St Helens 40-4 in their opening Super League game of 2013.

Paul Anderson's men went on to top the league table for the first time in 81 years.

And if that success came as something of a surprise, Paul Anderson's Giants proved that they should be considered as serious contenders from the very start of the season this time around with an impressive display at the DW Stadium.

Wigan, playing their first competitive match since the departure of star full-back Sam Tomkins to New Zealand Warriors, were already without prolific winger Josh Charnley because of injury and then lost influential captain Sean O'Loughlin to a thigh problem shortly before kick-off.

McGillvary extended the lead with two opportunist scores near the right touchline, Shaun Lunt and Leroy Cudjoe providing the assists, although skipper Danny Brough failed with all three conversions and a close-range drop-goal attempt.

Brough, Super League's Man of Steel in 2013, wasted a presentable chance early in the second period when he failed to grasp a pass from Joe Wardle 20 metres from the try line, and Wigan registered their first points almost immediately afterwards when Thornley acrobatically touched down in the corner.

That score lifted the hosts, who crossed again when debutant Matty Bowen set up youngster Burgess to dive over.

But Huddersfield - who had forward Larne Patrick stretchered off in the first half - seized back the initiative when they caught Brough's high restart and McGillvary completed his treble.

In his eagerness to get Wigan back into the contest, Warriors full-back Bowen was perhaps lucky to escape on-field punishment for a high and late hit on opposite number Grix, although the incident was put on report by referee Richard Silverwood.

Grix would have the final say, making the most of Brough's sensational break to secure a superb opening-day win for Huddersfield.

"We got outmuscled. The best team won. Huddersfield wanted it more.

"It's tough to swallow because I felt we undersold ourselves. We're better than we showed.

"We'll fix it, we've got some tough characters in our team."

"A win's always good but to come to a place like Wigan and go up against the quality in their team was very pleasing.

"Wigan threw a lot at us and I thought in the main we defended real well. The most comfortable we looked was on our try-line defence.

"I don't think we played well to be fair, we were a bit underdone, but we'll take it."