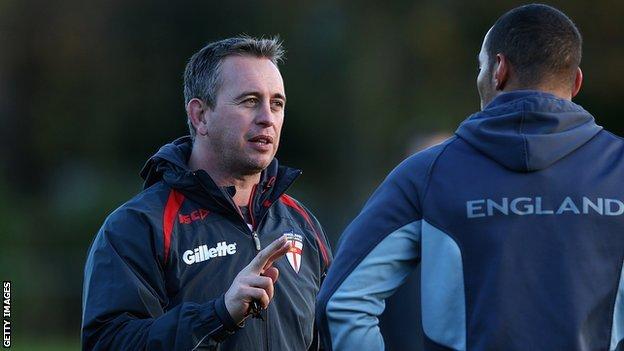 Steve McNamara has agreed to remain England head coach in a part-time capacity while becoming an assistant at Australian NRL club Sydney Roosters.

McNamara, 42, had also been linked with switching codes to join Bath after his contract expired following England's semi-final exit at the World Cup.

"I have a great team around me and I will be maintaining regular contact with them following my move," he said.

McNamara is set to join up with the NRL championship winners in the new year.

As assistant coach with the Roosters he will work under Trent Robinson, who previously led the Catalans Dragons in Super League.

"It's always been an ambition of mine to coach in the NRL and the chance to work with the NRL champions is something that doesn't come along very often," McNamara said.

"I have a great relationship with Trent Robinson and am looking forward to working alongside him and the rest of the Roosters staff in what is a very exciting chapter in my career."

The announcement ends speculation about a switch to rugby union side Bath. Director of rugby Gary Gold left the Premiership club on Monday and they are seeking an attack and skills coach to work with head coach Mike Ford, who is a former Great Britain rugby league international.

McNamara's coaching career began at Bradford and after assistant roles with Great Britain and England, he was promoted to England head coach in 2010.

His side won just one game, against Papua New Guinea, in the Four Nations tournament that year, before losing in the final against Australia on home soil in 2011.

England won the Autumn International Series, contested between France and Wales in 2012.

McNamara recently led his team to a dramatic semi-final exit at the World Cup, when a last-minute Shaun Johnson try saw New Zealand snatch a place in last month's final.

Speaking after that game, he said any decision on whether he would continue in the role would be made once the emotion of the defeat had passed.

He said: "We have made considerable progress internationally over the past four years and this arrangement provides stability and continuity.

"The systems and structures that have been put in place during Steve's tenure as England coach have put rugby league in this country in a good place and this move will ensure that we continue to make progress."

McNamara, who won four Great Britain caps as a player, represented Hull, Bradford, Wakefield Trinity and Huddersfield before retiring in 2003.

His next scheduled fixtures with England take place in autumn 2014 when the Four Nations tournament in Australia and New Zealand begins.