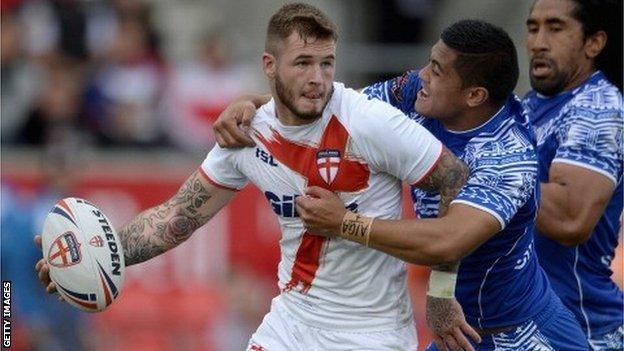 The Leeds Rhinos full-back, 22, is the second player to exit Steve McNamara's squad after Salford's Gareth Hock was thrown out for disciplinary reasons.

Hardaker was not chosen for either of England's first two tournament matches.

It continued: "He has informed the England RL management team that he wishes to withdraw from the squad and will not play any further part in Rugby League World Cup 2013. No replacement has been called up.

"I contacted Hardaker over the weekend and he told me he was poorly. There is no replacement so England will complete the tournament with 23 players in their squad."

"England Rugby League will work with Zak's club, Leeds Rhinos, to support him during this period."

McNamara cited illness as the reason for Hardaker's absence on Saturday.

When asked if he was being punished for a breach of discipline, McNamara said: "Absolutely not."

Former Leeds, Great Britain and England player Keith Senior told BBC Look North that it was a "massive disappointment" for Hardaker that he was no longer involved in the World Cup.

"Hopefully he will get through his troubles because he has great potential and he has a very big future," added 37-year-old Senior.

Second-rower Hock confirmed his own removal came after he and some team-mates went on a night out after England's surprise defeat by Italy before oversleeping the next morning and missing a recovery session.

Former captain James Graham was also left out of England's squad for their opening match against Australia, with McNamara walking out of a pre-match media conference when asked by journalists about the player's absence.