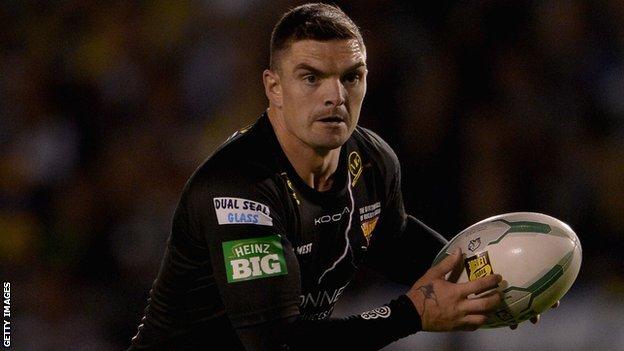 Huddersfield captain Danny Brough will captain Scotland at the 2013 Rugby League World Cup after switching his allegiance back from England.

Brough was Scotland skipper at the 2008 World Cup before going on to represent England in an International Origin match against the Exiles.

The 30-year-old from Dewsbury in West Yorkshire qualifies to play for Scotland through his grandfather.

"Danny has had a fantastic season both individually and as captain of the Huddersfield Giants," added McCormak.

"His leadership quality is something that I've kept an eye on during the year.

"We are lucky to have a number of outstanding players representing us in this year's World Cup."

Brough, who led Huddersfield to this season's Super League play-off semi-finals, has scored 59 points in 10 Scotland appearances and previously played for Hull, Castleford and Wakefield Trinity.

McCormack will name his 24-man squad on 1 October.