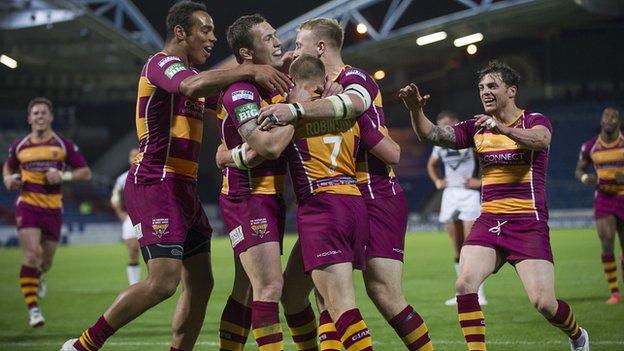 Huddersfield Giants half-back Luke Robinson is not expecting a repeat of their thrashing of Hull FC when they face Warrington for a place in the Grand Final on Thursday.

Robinson, 29, scored four tries as the Giants blew away the KC Stadium side 76-18 last week.

He told BBC Radio Leeds: "Fingers crossed it'll be just like last week, but I can't see it being that way.

"It'll be a nip-and-tuck game and the fine details will decide who wins it."

Warrington selected the Giants as their semi-final opponents, who beat them to the League Leaders' Shield by one point, in Club Call on Sunday.

Wolves boss Tony Smith has criticised the system but Robinson says his team will not take any extra motivation from having been picked.

"I don't think it was a surprise that they picked us. Pretty much every fan said they'd see us at Warrington after last week's win," he said.

"It is what it is, it's just part of the game. Whoever we'd have played would have been a difficult match and I don't think any of our players needs extra motivation at this stage."

Robinson is one of the longest-serving members of the Huddersfield squad, having joined them from Salford in 2007.

Warrington have got the better of Huddersfield in their three meetings so far this season, including a comprehensive 44-24 win in the Challenge Cup.

The former Wigan player believes the Giants are at the start of a successful period.

"I've been with the club through a transitional period and we've really made strides over the last few years," he said.

"It's been massive to be with a club through something like this and you only really savour the highs if you've tasted the lows.

"Hopefully this season isn't a one-hit wonder and we're entering a phase that we'll look back on fondly in years to come."