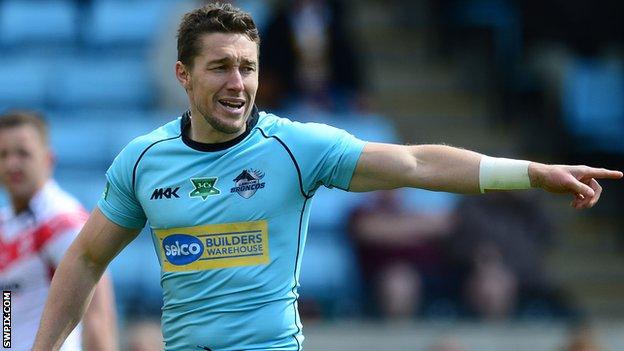 Castleford Tigers have re-signed utility back Luke Dorn from London Broncos on a two-year contract.

It will the 31-year-old's second spell with the club, having played for Castleford during the 2008 season and ended as their top try scorer.

"Luke is a player I have admired for a long time," said coach Daryl Powell.

"His ability to play at half-back or full-back is massive and his leadership qualities and experience make him a key recruitment for us next season."

Australian Dorn told the club website: "I absolutely loved my time at Cas and I'm very, very excited about coming back. Had circumstances been a little bit different at the time, I think that I probably wouldn't have left.

"I bring a lot of experience, I bring my knowledge of the game and my enthusiasm for success.

"The quality of young players playing at Cas at the moment is brilliant. To have some older guys there that can have a bit of a leadership role with them on and off the field is only a good thing."

Dorn had already confirmed his decision to leave the Broncos before news of their perilous financial plight was announced last week.

His arrival will help to fill the gaps left by the departures of Rangi Chase to Salford and Jordan Thompson, who is set to join Hull FC.