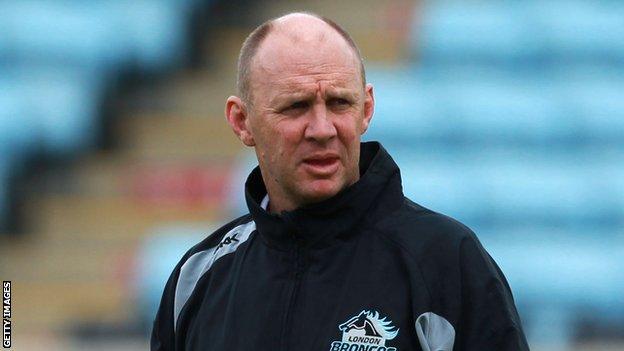 London Broncos head coach Tony Rea is confident the future of the club will be resolved soon.

The Broncos are expected to make some staff redundant this week to enable a deal over their future to be struck.

He told BBC London 94.9: "The main thing is to make sure we have a club at the start line in Super League and ready to perform and compete.

"Providing some of the conditions are met, the intention is that and everybody is working towards it."

David Hughes, the owner of the Super League club, is yet to confirm his level of funding for next season, but the club say they are engaged in "detailed and advanced discussions on their future for 2014 and beyond".

The Broncos have not signed any new players for 2014 and have no venue for their home games next season.

"We are not the only club which has to make some strong decisions," Rea added.

"There is no hiding from it and it is a hard time with tough things going on.

"The League has to make some strong choices, which I am sure they will do. There are a few things which have to happen."

The Broncos maintained their record of never having finished on the bottom of the Super League table when they won 34-22 at Hull KR on Sunday.

"In the back end of the season we really showed what the team is about," he said.

"We have taken a lot of lessons out of this season that will stand us in good stead.

"It gives everyone a lot of belief and faith and shows it can be done."