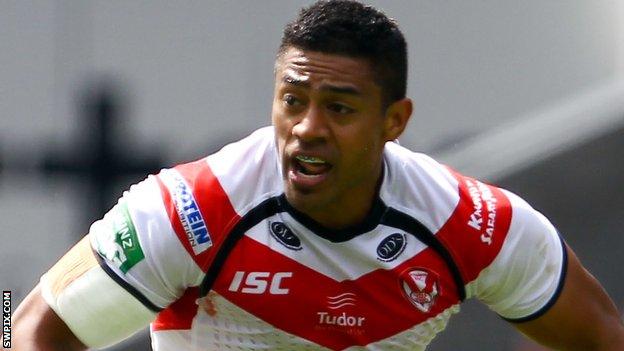 St Helens blew Hull FC away inside the first half to finish fifth in Super League and earn a home tie against Hull KR in the first round of the play-offs.

Swift and Louie McCarthy-Scarsbrook added to the rout, with Danny Tickle's try a mere consolation.

Jonny Lomax kicked three of five tries in addition to a conversion by Jordan Turner, while Danny Tickle landed his one kick.

Hull will play Catalans in their play-off, with the result of Saturday's match between the Perpignan club and Warrington determining which team has home status.

Victory for Saints was their sixth in seven, with just the one defeat by old adversaries Warrington denting an impressive run of form.

Such momentum will be crucial for Nathan Brown's side, who have finished outside the top four for the first time since 2004.

It took 24 minutes to break the deadlock in tricky conditions, Wilkin taking advantage of a kind bounce from his own grubber to touchdown for Saints.

Jamie Shaul was held up shortly after as Hull sought a quick-fire response, but Saints struck again when Swift's pace took him 80 metres and, after that break was held up, Jones spun his way over.

Provider turned scorer when Swift left the Airlie Birds defence in his wake after gathering a loose ball inside his own half, and a fourth try after the hooter had gone from the returning Manu made it 22 unanswered points for the visitors at the half-way stage.

Hull responded immediately after the break, although it looked a forward pass that put Richard Whiting over after Saints kicked out on the full.

There was to be no comeback from the hosts though, as a Saints 40-20 created the field position for James Roby to tee up Salford-bound Meli for the fifth try, and a cute kick from Lomax put in Swift for his second.

Tickle's late converted score was little more than a consolation, as McCarthy-Scarsbrook breezed over to tie up the scoring for the Red Vee.

"We gave them a massive leg-up. We were our own worst enemy and we lacked composure. We were up against a really good side there and we gifted them 22 points in the first half.

"We will have to address our errors and we will address it. The skill level at times was appalling. To come in at half-time 22 points down was extremely disappointing.

"We started the second half well and had a lot of pressure down their end but then we seemed to panic again."

"I thought we were a bit scratchy in the first half but we scored some really well-constructed tries in the second half.

"Adam Swift is going really well and he's working hard on his game. James Roby came through the game as well, which is a bonus for us. The team is learning how to use Willie Manu better and you can see the difference. The way you use him is important.

"We are not afraid of going away from home. I think the competition is a lot stronger than it has been in the past. The bottom four teams in the play-offs are all really strong teams. Years ago, apart from Leeds, there weren't any teams that were going to threaten the scorer. If teams don't play well, they'll get beat."