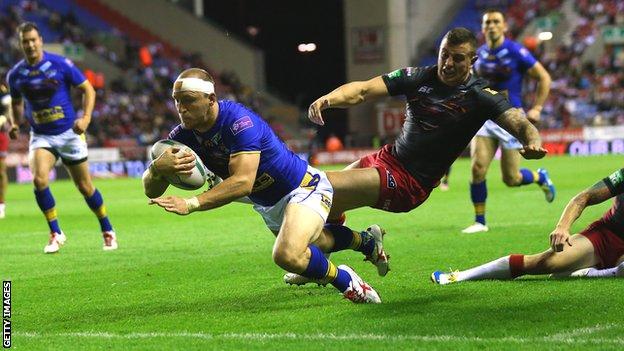 Reigning champions Leeds Rhinos sealed third spot in Super League with victory at Wigan Warriors in their final game of the regular season.

But the visitors dominated the second period with three unanswered tries.

Carl Ablett, Joel Moon and Kallum Watkins all crossed for Leeds after the break, while Kevin Sinfield added two goals to complete an impressive win.

The Rhinos have made a habit of hitting form late in the campaign to win the Super League title, doing so in each of the past two seasons, and their victory at the DW Stadium will serve as a timely warning to the other teams in the play-offs.

Brian McDermott's side will face Warrington for a place in the semi-finals next weekend, while the Warriors will travel to league leaders' shield winners Huddersfield.

The two defeated sides in those fixtures will have a second chance to plot a path to the Grand Final on 5 October by virtue of their final league position.

Wigan welcomed back several first-team regulars after last time out, though they were while Leeds included Jamie Jones-Buchanan in their starting line-up after a two-month absence because of a knee problem.

It took almost 25 minutes for Rhinos winger Jones-Bishop to break the deadlock, intercepting Blake Green's pass and running the length of the field to score the game's first try.

Stand-off Green atoned for his error shortly before the interval, breaking the line inside his own half and giving Richards the simplest of tasks to cross for a try he converted to give Wigan a narrow lead.

But Leeds struck back immediately after the break, Ablett powerfully rounding off a sweeping move near the left touchline, before centre Moon added a third Rhinos score in similar fashion.

And when England international Watkins latched onto his own grubber kick to extend the lead to 14 points, there was no way back for Wigan, who have now lost their last three home fixtures.

"We weren't at our best. I thought Leeds were outstanding.

"We tested them in small parts of the game but not enough. Leeds have some classy players who know how to win games and I thought they did a job on us.

"It's sad the way it's happened but I know we can play better than that. We've got a big game on Thursday and we will have to make sure we're good for that."

"I've never finished this high [in the table]. I'm very fortunate to be coaching these type of people.

"We're not slapping our backs too heavily but it's a remarkable effort by the players. We've been without some key people for such a long period of time but we've all stuck together through testing times.

"I think we've been good for the majority of the year. I know it seems like we've just started to wake up but we've been in good nick for a while in fairness."