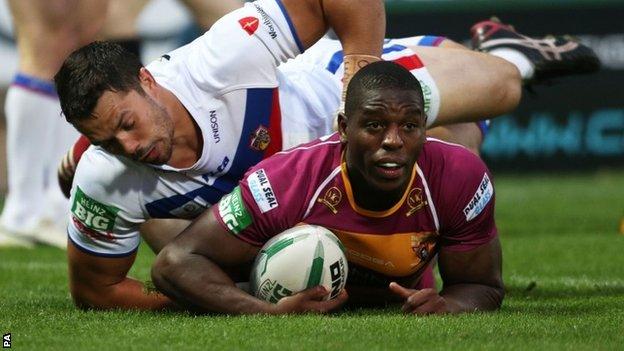 Huddersfield Giants thrashed Wakefield to claim the league leaders' shield, the first time they have finished top of the table in 81 years.

Jason Chan opened the scoring after five minutes and Danny Brough kicked the first of his six conversions.

Brett Ferres' try came before Chan landed his second, giving the hosts a 18-0 lead at half-time.

After the break, Jermaine McGillvary grabbed a brace, and Shaun Lunt and Aaron Murphy increased the lead.

Huddersfield become only the sixth winners of the shield and, after collecting their first silverware of the Super League era, will now look to reach October's Grand Final and secure their first championship triumph since 1962.

With only one round left to play, the Giants knew a win would make it impossible for second-place Warrington to catch them, and visiting Wakefield never looked capable of spoiling the party.

Wakefield fell further behind after the restart when Brough combined with Joe Wardle to send winger Murphy over for his 19th of the season.

McGillvary added two more before Lunt put the seal on an impressive display with a last-minute try, with Brough kicking his sixth goal from seven attempts.

"To me it feels like we've just won another game but I know what this means to this club and this group of players.

"We've just joined an elite band of clubs to have completed this achievement. We've done what half the competition haven't and it's the first time for 80 years for this club so it's a proud achievement.

"A lot of players in this group have never won anything but now they can tick a box in their CV."

"We didn't have the ideal preparation. I sat the players down yesterday and told them Timmy [Tim Smith] had been sold to pay the wages. I sensed a very quiet dressing room before kick-off.

"It's been a difficult few days to say the least. The problems started to emerge two months ago but the true extent of them has come out in the last couple of weeks.

"I still don't think I'm aware of everything but I have a lot of respect for [chairman] Michael Carter and he'll tell us where we're at."