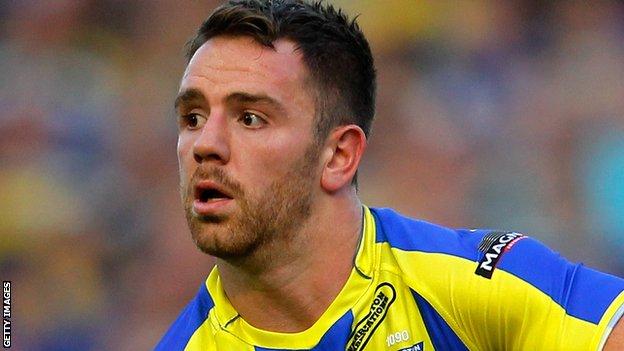 Warrington half-back Richie Myler could be out for the remainder of the season with a knee injury.

The 23-year-old suffered the problem against Castleford but head coach Tony Smith is unsure of when he could be available again.

"It's really down to how well he recuperates," Smith said.

"Whether that's a matter of two or three weeks we're not sure or if it's longer than that it will just be down to how he feels."

He added: "It's not serious enough to go and operate on so it's one of those in between and when he feels good enough to return, that's when he'll return."

The Salford scrum-half had suffered ligament damage on the same knee earlier in the season and was just coming back from the problem.

Myler's condition will also be a concern to England head coach Steve McNamara, who named the playmaker in the squads for last Autumn's Tri-Nations series and the Exiles game earlier this year.

With Danny McGuire likely to miss out after breaking a leg, Gareth Widdop recovering from a serious hip injury and Danny Brough having pledged his future to Scotland, only Kevin Sinfield and Rangi Chase have played regularly at six or seven from the players recently called into the England squad.

Despite the fact Rob Burrow, Jon Wilkin and Stefan Ratchford have all filled in the half-back positions at domestic level, a lack of genuine cover going into the World Cup later this year could be an issue.

Meanwhile, speaking on the Super League Show, Warrington captain Adrian Morley added to the concerns that Myler may not return in 2013.

"Richie Myler had a recurrence of his knee problem last weekend, it doesn't look good I think that's his season gone," he said.

Regarding his own leg injury, Morley added: "The week after Wembley I should be back, and Ryan Atkins and Lee Briers should be back around the same time."