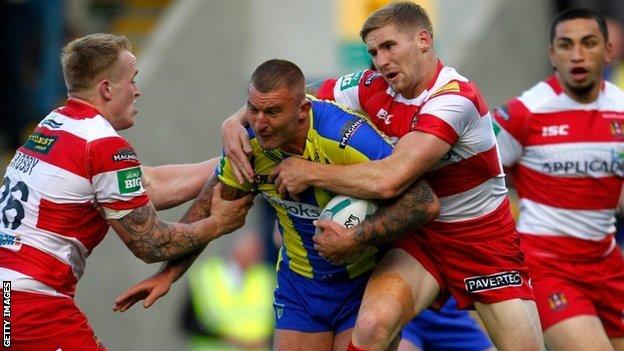 Super League will feature 12 teams from the 2015 season after changes to the competition structure were agreed by clubs at their annual general meeting.

Clubs ruled out reducing the number of sides from 14 to 10 and asked the Rugby Football League to look at two options.

One involves a 12-team Super League running alongside a 12-team Championship that would split after 23 rounds into three groups of eight.

The other option is for two divisions of 12 with promotion and relegation.

Following the meeting in Bradford, Super League and RFL chief executive Nigel Wood said: "The clubs engaged in a robust and frank debate about the future of their competition and gave their full support to the RFL executive in our search for the most compelling league structure.

"It is apparent that there is a strong and widespread desire to deliver a really exciting league season that provides well-run clubs at all levels of the game with opportunities to flourish, succeed and make progress.

"Our task now is to drill down into the details of a range of issues such as minimum standards, financial distributions and the various mechanics around promotion and relegation."

The clubs agreed last month to cut their number from 14 and get rid of the current licensing system - which has been in place since 2009 - in favour of a restoration of regular promotion and relegation.

Since the start of the licensing system, 14 clubs have been granted three-year licences (2009-11 and 2012-14). During that time, clubs cannot be relegated.

However, the new proposal means two clubs will be relegated at the end of next season.

Championship clubs will discuss the options at their meeting next Wednesday before Super League clubs reconvene, while an extraordinary general meeting is expected to be called in August to make a final decision.

"When you've got a relatively restricted player pool you have to sort a lot of players from overseas," he said.

"We were probably overstretching our resources and this is an opportunity to make the competition more intense, commercially viable and sustainable - and that's what's probably in the players' best interests in the long term.

"Promotion and relegation is something associated with British sport. Some clubs have a rich history and have been an integral part of the game, so it's good to have access back to the top flight. It's a positive step for the game, if tied up with a strong commercial plan."