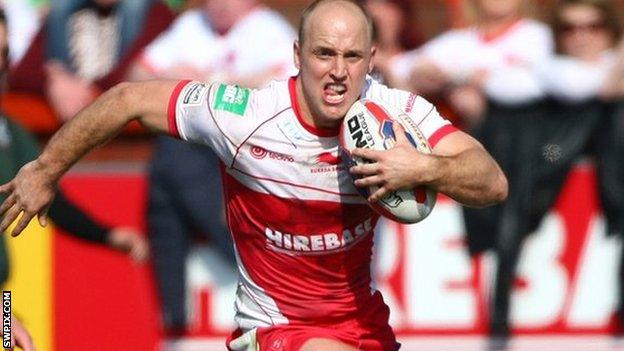 Salford led 18-6 at the break with scores from forward trio Wayne Godwin, Stephen Wild and Matty Ashurst, while Cory Paterson went over for Rovers.

Dobson then sandwiched his own try by creating scores for Paterson and Craig Hall, Travis Burns making it safe.

Aussie scrum-half Dobson missed just one conversion to take his points tally for the day to 12.

The visitors started the brighter as hooker Godwin squeezed over, capitalising on consecutive sets of six courtesy of a Paterson knock-on.

But Rovers hit back, Paterson atoning for his earlier error after Dobson broke the Salford line before unselfishly playing his fellow countryman in.

Godwin was a persistent thorn in the side of the Hull KR defence when collecting the ball from dummy-half and, having popped the ball up for Wild, the loose forward bulldozed his way under the posts.

Reds half-back Theo Fages then beautifully picked out Ashurst with a cross-field kick and Marc Sneyd added his third conversion of the half to put Salford well on top at the interval.

The home side were much quicker out of the blocks at the restart and Paterson bagged his second of the match, almost a carbon copy of the first as Dobson again bamboozled the Salford defence.

Finally Dobson was over the line himself after two fabulous assists, this time sliding under the sticks following a mazy run before adding the extras to tie it up at 18-18.

Rovers were ahead for the first time in the match when Dobson yet again laid on a team-mate, passing to winger Craig Hall who scored in the corner.

Then Burns ended the game as a contest seven minutes from time, throwing the perfect dummy to seal a superb comeback win for the home side.

"Full credit to Salford because they had a great completion rate in the first-half whereas we dropped a lot of ball.

"The second half still wasn't great but our defence was really good and I knew if we could stop them from scoring we'd be alright.

"Our ball control wasn't up to standard in the first half but we addressed that and it was a good defensive display in the second half.

"We turned the screw well and in the end we did enough to win."

"We are disappointed that the game slipped away from us.

"We contributed to that ourselves but Hull KR took a step up as well.

"They looked after the ball better in the second half, put us under more pressure and we couldn't do the things we were doing in the first half.

"A couple of individuals went away from the game plan because we were playing well and they were getting giddy.