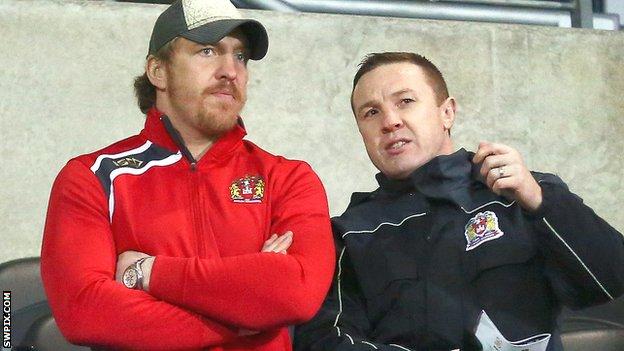 Andy Powell described his rugby league debut for Wigan Warriors as an "amazing" experience, albeit in a losing cause against Castleford.

With his squad decimated by injuries, Wigan coach Shaun Wane gave the 31-year-old, who switched codes from rugby union in May, a first appearance.

at the DW Stadium on Friday.

"The result wasn't great but to get on the pitch and wear that jersey was a big step forward," said Powell.

In April, the Wales rugby union international and began training with the Warriors at the conclusion of the Premiership campaign.

The former Sale Sharks forward told BBC Radio Manchester: "I knew it was going to be tough before I started.

"I've always watched it as a kid and it's an athlete's game. You have to be the best and I came in at the start with that feeling.

"I've got plenty to work on but I'll give it my best shot and I'll definitely get better."

Huddersfield Giants have cut Wigan's lead at the top of Super League to a single point after the Warriors suffered consecutive defeats against Warrington and Castleford.