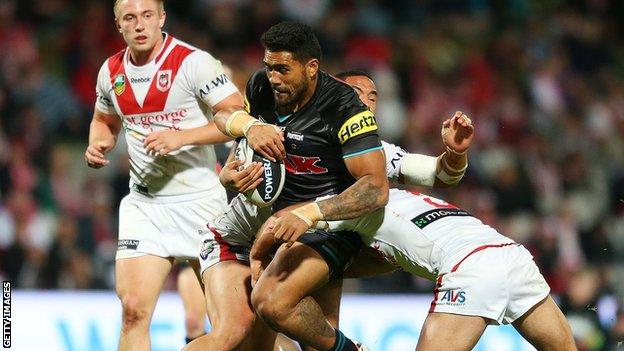 Mose Masoe has revealed former team-mate Sia Soliola played an important role in his decision to sign a two-year deal with St Helens next season.

"Sia made the move there [to St Helens in 2010]. I've seen him a couple of times since and he's loving it there," Masoe told BBC Radio Merseyside.

He continued: "When I got the offer, I thought at least I would know Sia there and Luke Walsh as well. It will make it a little easier to make the move to England."

is presently keeping Soliola, who has more than two years remaining on his Saints contract, from taking part in their Super League run-in.

Masoe, meanwhile, is excited by the prospect of and says his move could have happened much sooner.

"We've always wanted to travel and see the world, so it's a great opportunity for me and my young family to get over there," added Masoe, who will leave Penrith midway through a two-year deal.

"I got an opportunity to come last year, but my partner was pregnant at the time so we couldn't really make the move. Now we've had the baby, we think it's a good time to come to England."