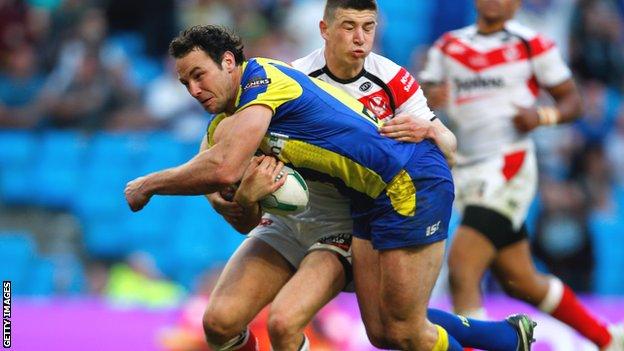 Adrian Morley is to fulfil a lifetime's ambition after confirming he is to join his hometown club Salford.

The Warrington prop, England's most-capped player, will join the Reds on a one-year deal in 2014.

"I'm a Salford lad and I used to support them as a kid," 36-year-old Morley told BBC Radio Manchester.

"I thought I'd never get the opportunity, but I've played on longer than I thought I would. It will be fantastic to finish (my career) there."

Salford, who are currently bottom of Super League, but despite that setback, Reds owner to take the veteran to the Salford City Stadium for 2014.

Morley added: "[A move to Salford] just never happened - I went to Leeds, then Australia and then Warrington.

"[This offer] was always appealing because it was Salford, but even more so now they've got Dr Koukash there, some stability and the new stadium."

In an illustrious career spanning almost two decades, Morley has won at least one trophy with all four professional clubs he has played for, including Australia's NRL title with Sydney Roosters in 2002.

Speaking to BBC Sport in January, he admitted he was beyond the end of the current Super League campaign.

However, he revealed that as well as the interest from Salford, Warrington had made him an offer to stay at the Halliwell Jones Stadium next year.

"They were keen to retain me, which is flattering. I am 36 now," added Morley, who

"Once the offer was there from Salford, it was a tough decision in one respect and an easy decision in another respect."

Now Morley wants to end his time with the Wire in style, by captaining the club to their first Super League title.

"We have done very well in the Challenge Cup but a Grand Final win has eluded us," he said.

"I've had an incredible time there [at Warrington]. They took me in as one of their own.

"To finish the season successfully with them would be great and then we'll move on to Salford and try and make them as successful as we can."