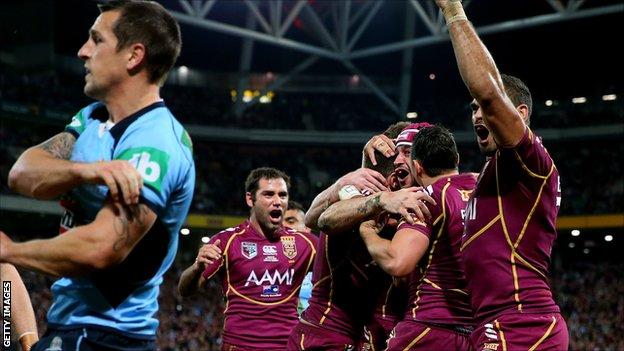 Blues, who replied through Brett Morris's score, need to win the decider to end a seven-year losing streak.

Mal Meninga's Queensland arguably lost the first match in Sydney during an inspired Blues first 40, and their victory was built on similar pressure.

Roared on by a near-52,000 crowd at Suncorp, the hosts started at pace and after NSW coughed up a penalty for a ball-steal in the tackle, the Maroons took full advantage.

The rivalry between Queensland and New South Wales, the states where most of Australian rugby league takes place, started when an annual series between the two was introduced in 1980.

Players eligible to play for the Australia national team are entitled to be called up to represent the state upon which they played their first senior rugby league.

The two states play a best-of-three series on an annual basis, and the fixture has grown to become one of the most high-profile in rugby league.

Since the contest was formalised in 1982, Queensland have won 17, New South Wales 12, and two were drawn.

Clever hands from Cameron Smith and Thurston worked the ball to Brisbane Broncos skipper Sam Thaiday to power over in the second minute.

The home side continued to dominate, winning a penalty close to the Blues line which Thurston knocked over for two, although his kick cannoned off a post on its way through.

Smart kicking from Smith continued to pin NSW inside their own half, and the pressure told when Thurston slipped Boyd in on the left for a second Queensland try which the stand-off converted.

Mal Meninga's side went in 14-0 up at the break and were on the front foot again at the beginning of the second half.

First they forced a drop-out from which a fizzing cut-out ball from Thurston found Boyd to streak in for his second of the game.

Mitchell Pearce and Billy Slater clashed, with the former emerging with a bloodied face and the latter placed on report, and the rivalry sparked up again moments later after a push at a NSW play-the-ball.

Referee Shane Hayne sent Maroons duo Justin Hodges and Brent Tate and Blues' pair of Trent Merrin and Greg Bird to the sin-bin for 10 minutes for their part in the brawl, and with the quartet off the field, Queensland extended their lead.

Another towering kick went out to the left from Cronk, and Greg Inglis - on his 20th Origin appearance - gathered the ball before darting in to score, Thurston again tagging on the extras.

Blues did eventually add their name to the scoresheet when Morris chased down a Robbie Farah kick to score, and James Maloney popped the ball between the posts for the additional two, but the Maroons added a further two points from Thurston's late kick to equal the series and set up a winner-takes-all 80 minutes in Sydney next month.