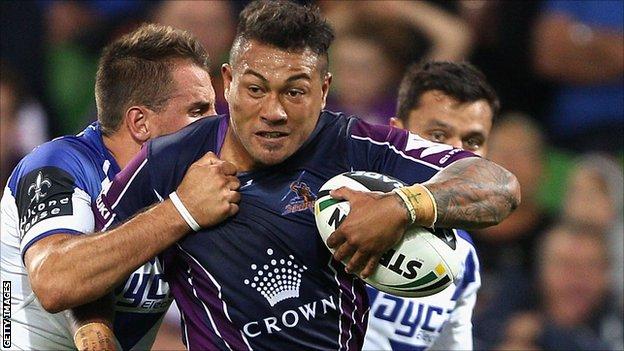 Salford City Reds have signed Melbourne Storm three-quarter Junior Sa'u on a two-year deal ahead of the 2014 season.

New Zealand international Sa'u, 26, joined the NRL Premiers from Newcastle Knights for 2013 and has scored 27 tries in 90 matches.

"Junior is box office. He is an explosive talent," Noble said.

"Every time I have seen him play in the NRL or for New Zealand he has been an absolute handful.

"He is young and coming into the peak of his career and he gets a great rap from [Storm coach] Craig Bellamy. We are really looking forward to him being a big part of what is going to happen here."

Meanwhile, Storm have confirmed that Lagi Setu will also be leaving the club for the 2014 season to join Canberra Raiders, to free up space on the salary cap and in the squad.