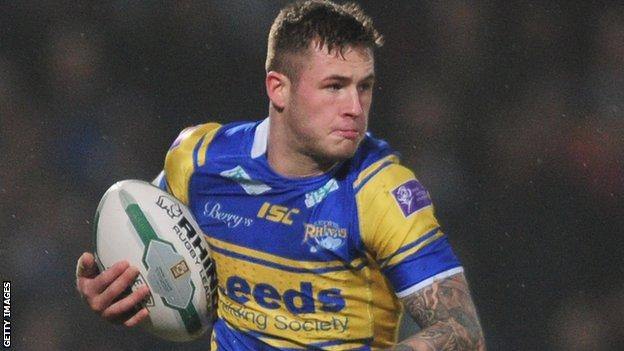 Zak Hardaker scored a try and kicked 12 points as Leeds eased to victory at Widnes, despite Kevin Brown's treble.

Joel Moon and Liam Sutcliffe helped themselves to braces in the first half, while Rob Burrow, Ryan Hall and Hardaker also went over for Leeds.

Brown scored a hat-trick either side of the break, with Gareth Hock twice and Rhys Hanbury also scoring for Widnes.

I've not seen a half as bad as that for a long time. I am very disappointed and it was embarrassing

Burrow completed his own double after half-time, with additional scores for Ben Jones-Bishop and Kallum Watkins

All the Leeds backs went over as last year's champions coasted to victory, but the hosts put up a fight after the interval and outscored the Rhinos in the second half.

The result means Leeds, who racked up their highest score of the season, close the gap on leaders Wigan to six points with a game in hand.

They worked the overlap perfectly to allow Moon to breeze under the posts for the first try of the match in the eighth minute.

Hardaker was then at the heart of the move for the visitors' second try with a burst of speed, before feeding Watkins, who in turn freed Sutcliffe.

Moon's strength saw him bustle over for his second try, with Hardaker missing his kick for the first time in the afternoon.

Hardaker set up a second try for Sutcliffe, with Widnes leaving too much space and the Rhinos then powered through the middle with Burrow adding their fifth try and Hardaker, who had missed his last two attempts, landing his third kick.

He was successful again when he converted after Paul McShane's lob was latched onto by England winger Hall.

And Hardaker then converted his own try, finishing off a well-worked move to put Leeds in complete control.

Widnes finally got on the board a minute before the break as Brown produced a fantastic dummy to go over, and Jack Owens kicked the extras to close the gap to 32 points at the break.

The visitors began the second half in the same manner as the first, working the overlap perfectly on the right-hand side to allow Jones-Bishop to score in the corner.

A fumble from Owens allowed Carl Ablett to send Burrow free for his second touchdown, but Widnes scored their second try when Brown set up Hock and Owens landed his second successful kick from two attempts to make it 48-12.

Watkins then ran in Leeds' 10th try, before Brown completed his hat-trick at the other end and Hanbury also went over for Widnes.

Brown and Hanbury set Hock free to score the game's final try, with Owens keeping up his 100% success rate with the boot.

"I've not seen a half as bad as that for a long time. I am very disappointed and it was embarrassing. There were smatterings of last year in it.

"We went after Leeds a fortnight ago, but they gave us a lesson here in how to hassle opponents. They had more energy and enthusiasm than us, tackled harder and ran harder.

"It's a simple game, but it was all over by half-time. We got back some pride and character [after the break], but it was too late.

"Jamie Peacock was awesome for Leeds in the first half, Paul McShane was very good and Rob Burrow ran the show."

"I'm happy with all of it and have no problem with the last 20 minutes. Widnes are a good team and decided to play.

"We had a few blokes off the field then and were already without eight regulars. I have zero issues with the points we conceded.

"Widnes had a crack and didn't give up. I won't let the last 15 or 20 minutes put a negative slant on what basically was a very good performance."