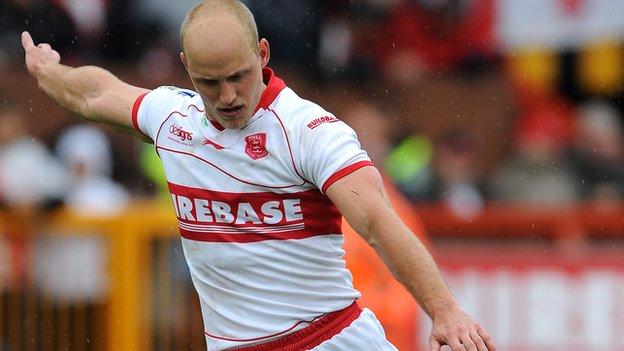 The Australian half-back, who revealed this week that he will join Newcastle Knights next season, kicked six goals and proved a major threat all night.

Saints, scoreless before the break, improved in the second half, winger Francis Meli and Anthony Laffranchi crossing for their two tries.

Defeat places pressure back on the shoulders of head coach Nathan Brown, whose team had won their last two games.

But four home defeats in 10 matches has left the Saints supporters audibly disappointed with progress this season.

Rovers came into the game on the back of an impressive victory in the South of France sunshine against Catalans last weekend, but adapted just as well to a miserable night on Merseyside.

Persistent rain made handling difficult throughout but, with the mercurial Dobson, stand-off Travis Burns and full-back Eden all harmonising neatly, Saints at times struggled to contain Rovers' incisive attack.

Burns made the most of a penalty for interference by Saints prop Tony Puletua, bursting through to touch down, although it took the consultation of the touch judge to award the try.

The visitors quickly followed that with another score when Eden carved a huge hole in the Saints rearguard and chipped to Brown who had the pace to touch down on the right.

Craig Sandercock's side were given a glimpse of what they will miss next season when Cory Paterson and Dobson return to their native Australia, after the duo showed superb handling to play in Rovers top try scorer Eden for his 12th of the season.

Both sides were forced to play with 12 for 10 minutes when half-backs Burns and Paul Wellens clashed midway through the half, but Rovers went in comfortably ahead at the hooter.

Having conceded three tries without reply Saints needed to respond after the break and did so when Jonny Lomax and Gareth O'Brien worked an opening on the left.

Meli finished well in the corner, O'Brien converting to bring it back to 16-6 and lift the home side, but indiscipline gave Dobson the chance to kick to re-establish a two score lead.

Mickey Paea was sent to the bench after a high shot on James Roby, yet still Saints could not profit from the field position and Rovers stood firm.

Dobson kept the scoreboard ticking over with three more penalties, and not even Laffranchi's dart in from close range, converted by Tommy Makinson, could turn the tide.

"I can't fault our effort, but we never got in the contest. It was our most disappointing performance since I've been here.

"Our attack was poor. They kept kicking the ball behind our wingers and we did it once. They kept forcing us into errors and we weren't smart.

"It was disappointing for the fans because we are capable of better than that. We had been building along nicely recently but we have taken a step backwards."

"It was a big win and gives the boys a belief they can win away from Craven Park. We were outstanding defensively.

"We conceded too many penalties for my liking but we showed great defensive resolve. Usually our attack is not too bad but it's our defence that gave me the most pleasure. They gifted us some possession but our defensive effort forced them into errors.

"We won't get carried away because we are still in the bottom half of the top eight. There is a lot we need to improve but we have been under the pump at times this year and I can't speak highly enough of the boys."