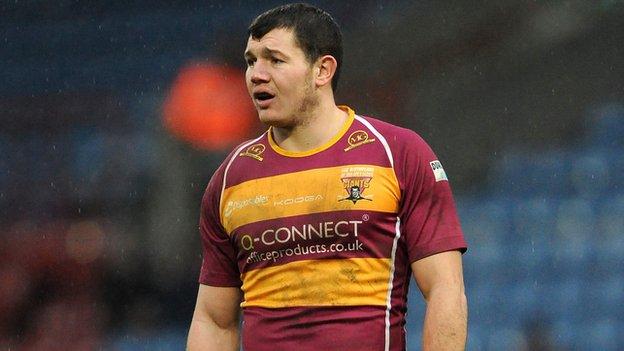 Huddersfield forward Brett Ferres led the way with his first hat-trick to help his team ultimately cruise to victory over Catalan Dragons.

It was quite tight at the break, 24-12, Danny Brough improving four tries to the visitors' unconverted three.

But the home side ran in six after the break, three of them to Jermaine McGillvary, to one lone French reply.

Brough landed six more goals for a 20-point individual haul as the Giants closed within a point of leaders Wigan.

Aaron Murphy, fit-again Luke George, making his first start since April, Shaun Lunt and Leroy Cudjoe all crossed as the Giants made it a double over Catalans, following up their 28-20 win in Perpignan in April.

But some of the gloss was taken from the Giants' win by injury to Wales captain Craig Kopczak, who picked up a ruptured bicep in his arm.

"I said to them at half-time they had to make a conscious decision about what they wanted from this game. Did we want the game to be 40-30 either way? Or did we want to put 40, 50, 60 on a good team because we knew we were capable of it.

"Thankfully we made the right decision, although I still thought even in the second half there was low energy. When we were scoring tries, we were walking back to receive kick-offs.

"There were strange emotions. I am sat in the stand kicking chairs wondering what's going on here and you look at the scoreboard and it's 60, so we obviously did something right."

"Even in the first half we scored some tries because their defence was not great. But our defence got worse, from the first minute to the last.

"You win a game with your defence but something was wrong for us tonight. I said at half-time there was no aggression or arm wrestle, it was touch football.

"I don't need to name players. We all took some short cuts and I don't like that. But credit to Huddersfield. They are a good team and they were too strong, too fast for us tonight."