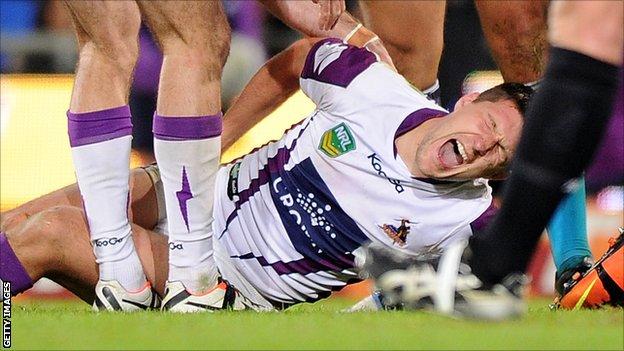 England stand-off Gareth Widdop is a doubt for October's World Cup after he dislocated his hip in Melbourne Storm's NRL defeat by Gold Coast Titans.

The 24-year-old has avoided a break or fracture of the bone but has suffered cartilage damage.

He will miss the rest of the domestic season in Australia, which ends with the NRL Grand Final on 6 October.

"It is devastating for him to have suffered this injury," Storm general manager Frank Ponissi said.

Widdop is set to join St George Illawara for 2014 and is likely to have played his last game for Melbourne.

Although he missed out on the autumn international series last year as England coach Steve McNamara opted for a home-based line-up, the playmaker was part of the Four Nations squad that lost the final to Australia at Elland Road the previous year.

The Halifax-born half-back has played all his professional career in Australia having moved to the country with his family aged 16.

McNamara has a dilemma in terms of cover, with Leeds Rhinos' Danny McGuire currently recovering from a broken leg, while Danny Brough has opted to play for Scotland.

Coincidentally the England coach is currently in Australia to meet with the NRL-based players in his World Cup plans, such as James Graham, the quartet of Sam, George, Luke and Tom Burgess, Jack Reed and Chris Heighington.