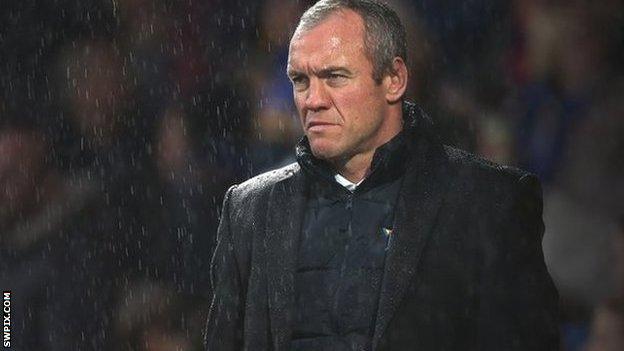 McDermott is missing nine regular first-teamers and has named five teenagers in the squad to play high-flying Huddersfield Giants on Sunday.

He told BBC Radio Leeds: "We have to crack on and find a solution, it's pretty exciting really.

"Everyone has a script for what our season might look like but we have our own to write and it could be special."

Carl Ablett is fit again, but with Joel Moon suspended the Rhinos are keeping their fingers crossed Brad Singleton passes a late fitness test on a dead leg suffered in the victory over Widnes on Monday.

The 19-man squad is entirely made up of players eligible to play for England and includes 15 players from the club's academy structure, with only Mitch Achurch, Jamie Peacock, Ian Kirke and Zak Hardaker not developed by the Rhinos.

The average age of the squad to face the Giants is 24 and, if selected, 17-year-old Elliot Minchella would become the first Leeds player to appear for the club who was born in the Super League era.

"We go through the right protocol and have a look at the injuries we've had, and we ask questions and research and review it and usually the answer has come up there's not much more we could have done," said McDermott.

"It's not the greatest situation, but all seasons have injuries and it's how you deal with them which determines whether you get to the big stuff at the end of the year.

"Most of the youngsters have had a game, a couple have had two or three, they have shown up really well and our challenge is to give them an environment in which they can keep being good.

"The dual registration [system] with Hunslet has worked well, and there are two or maybe three more in that U19 team who could come in and do a job as well, though it's a huge transition."