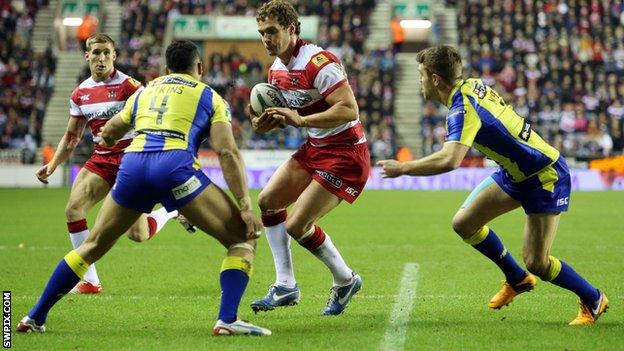 Both sides have recently won trophies, with Wolves claiming three Challenge Cups in four years and the Warriors finishing top of the league last year.

Earlier in the season they drew 17-17 at the DW Stadium.

"Going on past experiences they have been some of the most intense games, not just for us but the season," he told BBC Radio Merseyside.

"For the last two or three seasons we've probably been the most consistent performing teams throughout the regular season.

"When we come together there is a good rivalry there, a good intensity about each of the matches."

Both teams have hit form recently, with Smith's side having won eight of the last nine games in Super League, whilst the Warriors have won 13 consecutive games in all competitions.

One player who will not feature in the game is Wigan forward Sean O'Loughlin, who is out because of a knee injury, and Smith believes he has been one of the best players in the competition.

"I think he [O'Loughlin] has been the absolute standout. He and Sam [Tomkins] have probably been the best two players in Super League this year," said the 46-year-old.

"I haven't heard him mentioned about Man of Steel much but for me he's been an absolute wonder for them.

"I'd love him to be there on Monday night as he adds to the test of the intense game it is going to be. I'm sure they will be fine without him but he's been in terrific form for them.

"I know Sam grabs the eye but some of that platform has been set by Sean and I don't think he's been recognised by enough people this year in what he's done."