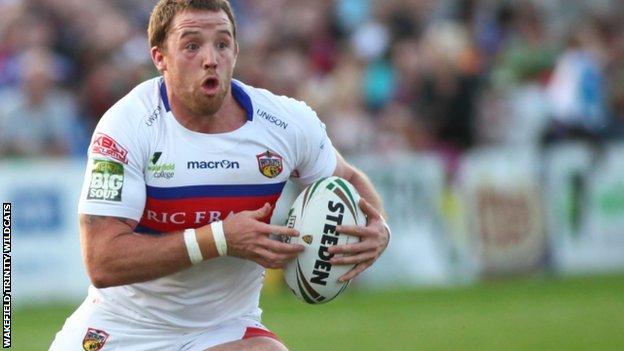 Peter Fox and Richie Mathers scores got the hosts on their way and Kirmond went over twice either side of a Paul Sykes try before the interval.

Harry Little laid on Liam Colbon for London's only try of the first half but Kieran Dixon crossed twice after the break to reduce the gap to 16 points.

Wakefield's comprehensive victory, aided by their captain's virtuoso performance and some reliable kicking from Lee Smith, ensured they celebrated the 140th anniversary in style.

London, who were without 11 players through injury and handed debuts to Joel Wicks, Little and Jacob Fairbank, struggled to compete, with Wakefield's first three tries owing much to questionable defending.

An excellent move finished off by Sykes and Kirmond's second try put the hosts 30-0 ahead before Colbon's try opened London's account.

Winger Dixon gave the visitors some hope after the break when he brilliantly completed two fine Broncos moves.

But Wakefield responded and Kirmond collected Tim Smith's expert lay-off for his third, before Mariano and Wood completed the rout.

"Danny Kirmond is in great form. Even though the intensity slipped away from our game for a bit it didn't slip away from his.

"He's been in great form and I've said it before that he has really responded well to the captaincy.

"It's definitely a case of job done. The first-half performance set up the win nicely.

"Undoubtedly the intensity dropped out of our game for a 20-minute period in the second half.

"We regained that intensity towards those latter stages and we came on strong late on which was pleasing. There are a couple of guys in there that believe they lost their way a bit during the game which puts a little bit of a dampener on it."

"You have got to put this game in perspective for the guys that are out there. The first period was difficult because they were trying to find themselves as a team.

"We started without our first-choice halves, front-rowers and back-rowers. That's a fair bit for a young side to go without, and Wakefield were simple and clever with the way they played.

"Once we found some rhythm as a team I thought the guys really stood up for each other and worked their way through the game okay.

"We spoke at half-time about being more physical and working as a team. The shape was okay but we just had to step up on the physical aspects of our game.

"I think the number of London kids in there was outstanding and it really gave it a buzz. It's funny when you work with the team it gives it a really good London feel."