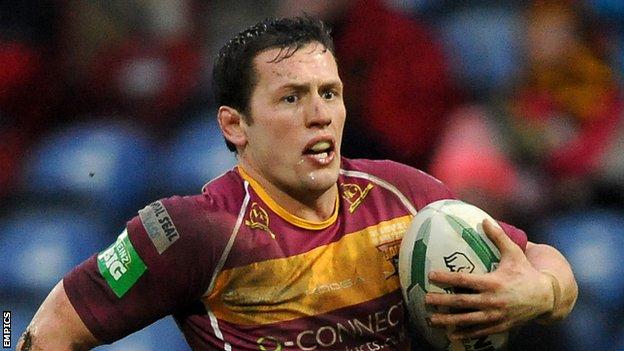 Huddersfield kept up the pressure on Super League leaders Wigan with a determined victory over rivals Leeds.

But tries from Shaun Lunt, Aaron Murphy and Brett Ferres gave the hosts a 22-12 half-time lead, despite Ben Jones-Bishop scoring for a Leeds side missing 10 senior players through injury.

Their win means they move to within three points of leaders Wigan, who face a tough trip to third-placed Warrington on Monday, while Leeds remain fourth.

Leeds had been boosted by the news that Carl Ablett was available to start following a five-match absence with a hand problem, however the injury-ravaged visitors fell behind when Cudjoe offloaded brilliantly to Robinson to cross.

And despite Sutcliffe exhibiting great strength to brush past two tackles to level, Lunt - against the club he won the Grand Final with last year - and Murphy raced over to put the Giants back in front, while Cudjoe also had a try ruled out for offside.

Jones-Bishop did manage to cross for the Rhinos following a spell of pressure, but Ferres was sent through the away defence by Brough - who kicked six conversions - on the stroke of half-time to take the score to 22-12 in the hosts' favour at the break.

When the visitors came back out, they began to exert pressure on the Giants, but failed to capitalise and were made to pay when Cudjoe broke through to score.

While Grix was in the sin bin for professional foul, Leeds took advantage of the extra man when Sutcliffe crossed.

However the influential Brough brushed past three defenders to lay on Lunt for his second before Prix got the final try of the match just after he had returned to the action.

"We came up against a team with a lot of people missing but they've been playing, whereas we've had some time off and everybody is a bit rusty.

"So there are some cohesion things we need to fix up and that's why I'm looking forward to playing Catalan on Friday because I know we can be better.

"He [Brough] must have had his best running game of the year so far."

"He [Sutcliffe] is not looking out of place at this level but in the whole scheme of things we finished up a losing team.

"The young guys are getting experience but you don't want it to be at the expense of results. You want to be able to give them game time and feed them into the team.

"I thought the game might have come down to fatigue but it came to concentration lapses near our try-line. I thought they were defendable tries that we conceded."