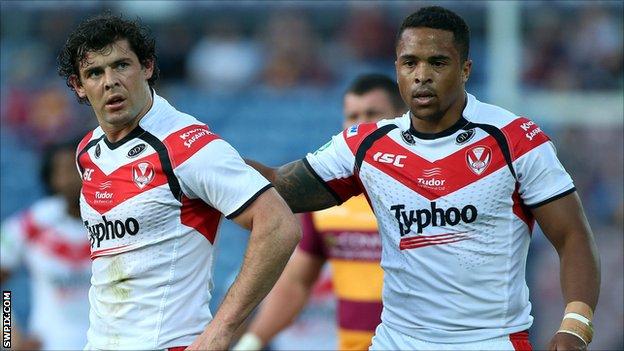 St Helens overpowered Salford in the second half with seven of their nine tries to hand Super League's bottom side another heavy defeat.

Paul Wellens scored from half-back as Saints romped to victory, to earn himself the praise of head coach Nathan Brown.

"He was never the quickest fella. I suppose if he does lose the touch it doesn't change the way he plays anyway," Brown said.

"People who rely on their speed struggle when they lose it. Wello is not someone who has relied on that throughout his career.

"He plays on great commitment and effort for the team and good awareness. He is adapting to his new role in the team well.

"Ideally I'd like Wello to play on for another year. He provides a lot for us with his leadership. We will be losing numbers of experienced players. The people we bring in won't be older players so we'd definitely like him to stay around."

Gareth O'Brien added to the tally with eight goals from 10 attempts.

Salford coach Brian Noble has seen his side concede 166 points in just three matches, after hammerings against Warrington and Wakefield.

Saints meanwhile have now won their last two games, after losses against play-off rivals Huddersfield and Warrington in recent weeks.

Turner made amends for an early spill close to the line when he finished off Lomax's pass, and Manu crashed in soon after for a second.

Gleeson dummied before crossing and neat work from former Saints outside back Lee Gaskell, as Salford responded but Gareth O'Brien's late penalty ended the first-half scoring.

Sneyd and Gaskell combined to tee up Jodie Broughton for the first try after the break, but Saints cut loose and scored 38 unanswered points.

Wellens, linked with a move to Salford in 2014, burst through a weak tackle from Adam Walne to mark his 450th Saints appearance with a try under the posts.

Lomax gathered a rebound from his own kick to touch down and quickfire Turner and Laffranchi tries put Saints fully in control.

Meli grabbed his brace as Salford floundered, and Josh Jones's try took Saints past the half-century mark to seal the win.

"There looks to be a pulse this week, and quite a strong one, because of the way we played in the first half and the way we tried to play.

"We shaded possession in the first half and that gave us an opportunity - but then it went massively against us. I do think the scoreline flattered St Helens a little bit and I don't think, in the main, our fans will be too dismayed this time because the players have had a dig.

"I thought we looked like a really good team for 50 minutes. I am less disappointed than I was last time. If I can knock a few nails into heads tomorrow, and show pictures as to why it happened, we can improve next week and get ready for a really big game down in London."

"First half I thought we were just doing enough. They responded to a few (poor) performances and there was an improved showing.

"They did some decent stuff but in the second half we really lifted the intensity, as we should do with some of the players we had and against a side in the position Salford are at the moment."