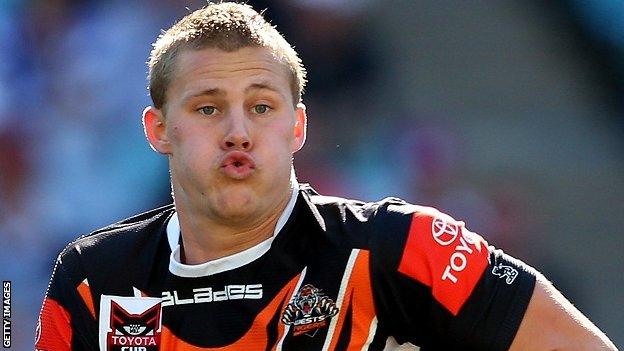 He believes the presence of the scrum-half should help play-makers Daniel Holdsworth and Shannon McDonnell, as the East Yorkshire club focuses on the end of season play-offs.

"Jacob will allow others to flourish," Gentle said of the 20-year-old.

Miller told BBC Look North: "If I can take a bit of pressure off Daniel it will benefit him and the team."

I'd like to bring a bit of control, a good kicking game, and hopefully steer the boys around the park

The young Australian signed for the Black and Whites in mid-May as a replacement for the released Brett Seymour but has only now been able to join his new team after a long wait for visa clearance.

In the meantime stand-offs Holdsworth and Richard Horne, full-back McDonnell and hooker Aaron Heremaia have variously taken the role.

But Gentle, who first coached Miller at Wests Tigers, is hoping removing that responsibility will enable his senior players to play with more creative freedom.

"Jacob will give good service to our back-rowers and the people around him will benefit," said Gentle. "He won't be the star every week but he'll allow others to flourish. He's only young, though, and we need to be patient."

Miller believes he is ready to make an immediate debut at Castleford on Friday.

"Pete [Gentle] sent me a playbook when I knew I was coming, and I have watched a lot of games on TV or on DVD, so hopefully I'm up to speed. The club is going great, morale is high around the place, so it's a good time to be coming here.

"I still have to earn my spot though, it's not a case of walking in and starting to play. I haven't played for four weeks, but before that I played three games in a week and my form wasn't too bad.

"I'd like to bring a bit of control, a good kicking game, and hopefully steer the boys around the park."