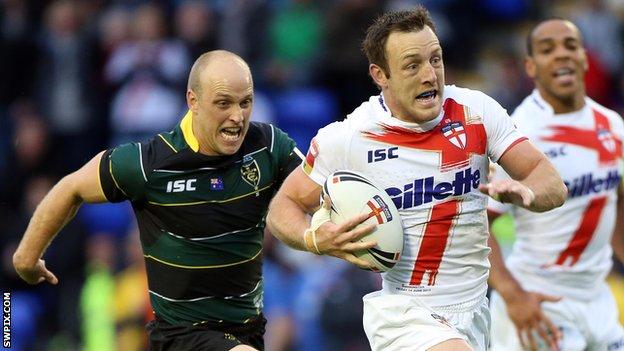 England and St Helens hooker James Roby believes England will only continue to get better ahead of the World Cup.

The 27-year-old was part of the side that beat the Exiles 30-10 at The Halliwell Jones Stadium on Friday.

"When you get tired you naturally go to your own habits, and we're in different clubs and have different systems," he told BBC Radio Merseyside.

"It's all going in the right direction though and we need to build on that for the World Cup."

The Saints hooker was continuing his comeback from an ankle injury and scored a try in the first half as England scored 24 unanswered points.

Tries from Mickey Paea and Joel Monaghan brought the Exiles back into the game but it was a comfortable victory in the end for Steve McNamara's side.

The international origin match was the final scheduled warm-up game before the World Cup starts in October and coach McNamara will now travel to Australia to watch his NRL-based players.

"The squad we've got, the English and Aussie-based players, when we all come together hopefully everyone is fit and raring to go," Roby added.

"There is a lot of competition for places in every position so it's going to be a great year and it should be a fantastic time for rugby league.

"Hopefully we can get some good performances on the pitch, ultimately get some good results and try and boost the profile of rugby league across the country."