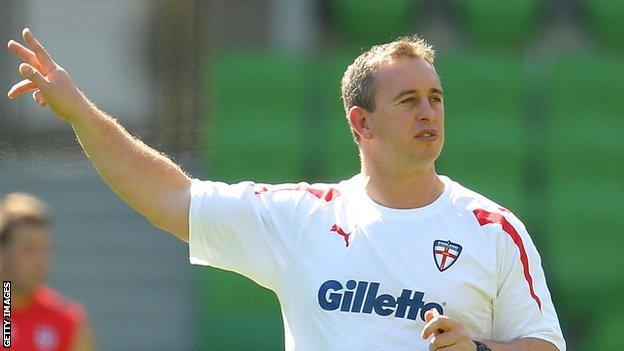 England coach Steve McNamara will travel to Australia this week to meet international players based in the NRL.

The trip will involve speaking to the players about plans for this autumn's World Cup in England.

"I have meetings with the England players to keep them updated and engaged with our plans," said McNamara.

"Even though I speak to our Australian-based players at least couple of times a month, the opportunity to see them in person is vital.

"They are all excited about this year and representing England on home soil. It is a big deal for them."

McNamara's side beat an Exiles team in the international origin game as preparation for the World Cup on Friday.

Zak Hardaker, who played at centre in the victory over a team of Super League's overseas players, has said he would prefer to play full-back, despite reigning Man of Steel, Wigan's Sam Tomkins, standing in his way.

"I'll fight for full-back," said the Leeds Rhinos player. "If I get picked in the squad, then I'm a squad player so, if the centre or wing spot needs to be filled because of injuries, then I'm happy to do that.

"But full-back is the position I'm playing at the moment and I'll hopefully do that."