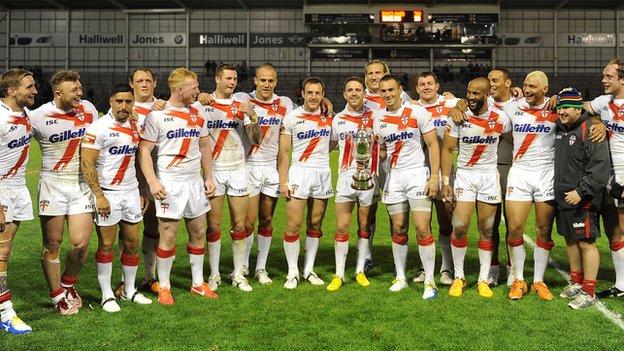 The England rugby league team had a taste of the big time this week as they continued to build towards the World Cup - but very little of it took place at Warrington on Friday night.

Singer Rihanna stayed at the same Manchester hotel as the squad and several players boasted of sharing a lift with her.

And on Wednesday full-back Sam Tomkins, Super League's very own Man of Steel, interviewed Russell Crowe on the red carpet at the London premiere of superhero film Man of Steel.

But in front of 7,926 at Warrington's Halliwell Jones Stadium on a cold and wet evening there was a slightly underwhelming feel to proceedings as England defeated the Exiles in their last scheduled competitive fixture before this autumn's World Cup.

"There are a lot of bust bodies in the dressing room," he said. "If you think that wasn't tough then you are wrong."

One end of the ground was empty except for the presence of a very large St. George's Cross and there was a decidedly parochial feel to it all as Wigan players were booed and Warrington ones cheered regardless of the colours they wore.

The previous three games between England and the cream of Super League's imports - one in 2011 and two last year - had been tight and generally low-scoring affairs.

But this year four tries in 15 first-half minutes helped England to a 24-0 lead at the break and although the Exiles rallied after the restart the home team eventually won 30-10.

The talk afterwards was predictably positive from England, with coach Steve McNamara describing the mood in the camp as "very, very comfortable" as they look forward to the World Cup, which starts with his team playing Australia in Cardiff on 26 October.

Tomkins called it the "perfect preparation" and bristled at the suggestion that England would have benefitted from a tougher encounter.

"There are a lot of bust bodies in the dressing room," he said. "If you think that wasn't tough then you are wrong."

Skipper Kevin Sinfield withdrew at the break with a hand injury, Gareth Ellis was helped off the field with a back spasm and Ben Westwood required stitches to a split eyebrow. In those terms it was a demanding game.

And the truth is that while the Australians are hardened by State of Origin football, the fixture against the Exiles is probably just about the best opposition England can muster halfway through a Super League season, certainly superior to playing either France or Wales.

Several England players had been keen to stress in the build-up that playing against the Exiles was a marked step-up from your average Super League fixture and pretty much Test-match standard in terms of skill and intensity.

The match capped what England reckon was another very useful week in camp at Loughborough University - now the team's permanent base - and Sinfield was keen to stress the importance of ending that time together with a hit-out.

"Ultimately as players we are judged on our performances and we made some huge strides," said Sinfield.

"There is so much that we can learn as a group, things cannot learn on the training field."

McNamara started with Richie Myler and Sinfield as his half-back combination and brought Rangi Chase off the interchange bench. The Exiles seemed to target Chase's defence after the break and that might be something McNamara will consider when picking arguably his most important pairing.

Some of the touches from Tomkins and Leroy Cudjoe, who deceived Brett Hodgson with a superb dummy for the first of his two tries, hinted at a strong self-belief running through the squad.

But perhaps the most candid assessment of the fixture came from Exiles coach Brian McClennan. When asked whether he had been impressed with England the former Leeds Rhinos boss replied: "Not particularly, but it was a pretty loose game in general. Not all that fast, I thought it was pretty slow."

McClennan at least acknowledged that the England team that lines up at the World Cup will be greatly enhanced by the return of their players currently in Australia's National Rugby League.

The Burgess brothers Sam and George, James Graham, Jack Reed and Gareth Widdop - they are hardened NRL players. Graham and the Burgess's, will bolster an already strong pack, while Reed will slot in at centre and Widdop will add competition in the halves.

But every single Australian and pretty much all the Kiwis will come from the NRL and as McClennan noted: "The big thing for England is handling the intensity of the NRL players."

The England players now return to Super League duty while McNamara will head to Australia to check on the English boys down there and take in a State of Origin fixture that will give him a more accurate gauge of the task facing his team this autumn than Friday's match.

Quite simply, the fixture against Australia at the Millennium Stadium will be a totally different proposition from the contest against the Exiles.

It will be the opening game of a World Cup and for once all eyes will be on a sport that badly needs a shot in the arm in this country - it says a lot when the tournament does not have a major sponsor and neither does Super League.

The stadium needs to be close to a sell-out and McNamara's men badly need to put up a performance against the Kangaroos, but it won't be easy.

The theory long ago took root Down Under that if the Kangaroos defeat the co-hosts in that match then they will in all probability avoid playing either England again or, especially, New Zealand until the final.

The Kiwis might have lost every one-off fixture against Australia since 1998 but they have developed the irritating habit of tripping up their Anzac rivals on the big stage - the 2008 World Cup final and the 2010 Four Nations being the two stand-out examples - and the Aussies are keen to avoid them for as long as possible later this year.

The Kangaroos have won nine of the previous 14 World Cups and they want their trophy back.

Since the Great Britain jersey was put into cold storage in 2007 and the emphasis placed on England, their record against the Aussies rather ominously reads played six, lost six.

But they are not the sort of statistics to dent the optimism of the ever-positive McNamara, who correctly noted in Friday's match programme: "Winning a World Cup is not supposed to be easy."