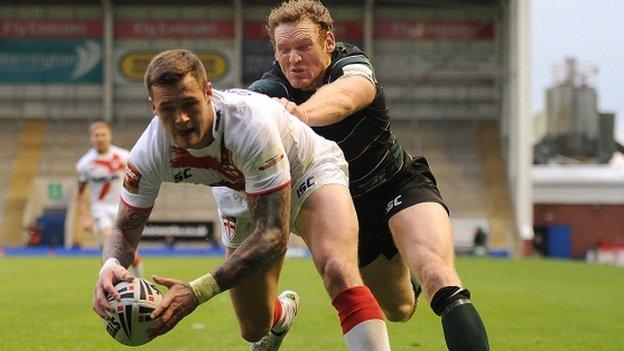 England comfortably defeated an experienced Exiles team in their only scheduled competitive fixture ahead of this autumn's World Cup.

But their opponents, made up of overseas players from the Super League, reduced the deficit after the break through Mickey Paea and Joel Monaghan.

However, England held firm and scored a late intercept try through Cudjoe.

The Exiles had won two of their previous three contests against England over the last two years and many had predicted another close match.

But the side, coached by ex-Leeds supremo Brian McClennan, wilted in the latter stages of the opening half and the contest was over by the break.

There were passages of destructive attacking play from England and some robust defence, but it was difficult to read too much into a contest against a hastily-assembled Exiles team.

England take on Australia in Cardiff on 26 October in the World Cup's opening fixture - and McNamara's men can expect a very different test when they face a Kangaroos team determined to win back the World Cup currently held by New Zealand.

The first 20 minutes on a chilly evening in Warrington were far from inspiring with England looking to grind down their opponents through the middle but disappointing with their kicking and support play.

Indeed, the opening kick of the match from skipper Kevin Sinfield - high and into the wind - actually went backwards towards his own try line.

However, any hopes that the fixture would provide England with a stern test five months before the World Cup were extinguished after a period of play when McNamara's team, marshalled by Sinfield, finally found some attacking cohesion.

Tomkins, who had already illuminated the match with an audacious pass from inside his own goal-line, sent through a grubber kick after 20 minutes that was touched down by Hardaker.

Shortly afterwards Brett Hodgson spilled the ball following a tackle from Cudjoe. Sinfield quickly passed to St Helens hooker Roby, back to his best after an ankle injury, who showed his athleticism with an 80-yard sprint that put daylight between the sides.

An increasingly one-sided contest moved further in England's favour when Richie Myler and Gareth Ellis, who went off injured in the latter stages, combined to create an opening for Cudjoe, whose dummy to wrong-foot Hodgson hinted at the confidence by now running through the team.

A blistering run from inside his own half by Tomkins after an inside pass from Sinfield concluded the first-half scoring and the Wigan full-back again touched down after the restart but his effort was ruled out for an obstruction.

Tomkins skippered the side after the break with a thumb injury preventing Sinfield from reappearing for the second half.

The injury is set to see Sinfield facing a spell on the sidelines, starting with missing Leeds's Super League game against Widnes on Monday.

What did we learn at Warrington?

"The England rugby league team had a taste of the big time this week as they continued to build towards the World Cup - but very little of it took place at Warrington on Friday night."

"I'm not that sure but I'll see the surgeon over the weekend," he said afterwards. "We think it's dislocated at the moment.

"At this stage I don't see how I can play [on Monday]. I think it will need some sort of operation but I will see what the surgeon says."

Sinfield's presence was missed and the Exiles did respond when several English defenders failed to halt a surging run from Paea.

Lance Hohaia then caught the England defence asleep and from the next play-the-ball the Exiles worked it quickly out to the right for Monaghan to score in the corner.

With 18 minutes left and the Exiles suddenly in gear, England defended a testing set on their line and closed out the remainder of the contest, with Cudjoe's late score after he intercepted an ambitious pass from Harrison Hansen adding gloss to the scoreline.