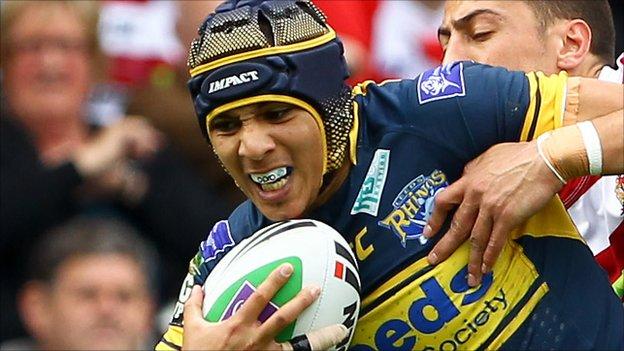 Ben Jones-Bishop marked his Leeds Rhinos return after a blood clot on the lung with a try in a Super League victory against Widnes Vikings.

The 24-year-old's comeback was a huge boost to the Rhinos, who were without 10 first-team players including skipper Kevin Sinfield and Danny McGuire.

Sinfield's absence after a run of 97 consecutive appearances, in addition to the loss of McGuire with a broken leg forced a reshuffle in the halves, with Burrow and Sutcliffe combining and Paul McShane coming into the hooker role, where he proved influential throughout.

Zak Hardaker at full-back took on the kicking duties in the absence of the Rhinos captain, landing all but one of the conversions.

However there will be questions asked by head coach Brian McDermott in defence, as Widnes's attacking threats were able to find gaps in the line throughout the 80 minutes.

Rhinos scored the game's first points when Burrow jinked his way through from McShane's dummy-half pass, and Jones-Bishop doubled the lead shortly after, gathering in Jimmy Keinhorst's flick to scoot in for his first try since completing recovery from a blood clot on his lung.

Regardless of their defensive frailty, Denis Betts's Widnes have had no problem scoring points, and they hit back through Mellor, after Ben Cavanagh and Patrick Ah Van combined in the build-up.

Burrow scored a second to re-establish the two-score cushion, Liam Sutcliffe's delightful feet taking him clear of Gareth Hock before feeding the England international to scamper through.

Yet again the Vikings came back, scoring two tries before the break to go in level.

Firstly Mellor gathered a loose ball in his own 20 and outpaced Joel Moon to the Rhinos line, and a minute later Dave Allen put Macgraff Leuluai through a gap in the Leeds line and slipped in Brown on his outside for a third score.

Leeds winger Hall's first score not only ended a six-match run without a try, it also marked his 150th touchdown for the club.

McShane had a try chalked off for obstruction after he dived in from dummy half just before the break and Widnes added further insult to injury when Hanbury got the first points of the second half.

The try came after the visitors held out under intense pressure from the Rhinos and owed much to the nous of Brown and Hock to create the opportunity.

However Leeds's success over the last two seasons has been built on resolve, and was evident as they struck three times without reply, Jones-Buchanan and Hall twice crossing to pull the hosts clear.

Hanbury showed pace and slick feet to turn Hardaker inside out and then left Jones-Bishop trailing for a late score to bring Widnes back within four points with five minutes to go but Sutcliffe's first Rhinos try was enough to see off the fightback.

"We had a fair bit to do tonight. Ultimately we came up with the goods.

"It wasn't the most clinical performance you've ever seen - we were a bit leaky defensively - but I think you've just got to roll with that when you field so many youngsters and people out of position.

"We needed to get the job done tonight, to get the two points, and we did."

"There's plenty getting away from us at the moment. They keep slipping away.

"We're pretty good value at the moment and I'd love to be a neutral watching this team but it's as frustrating as ever. We're two inches away from winning.

"It's individual errors and a lack of focus that is costing us. We are making less mistakes but they are still crucial ones. We've got be stronger as a group and keep driving those small margins up."