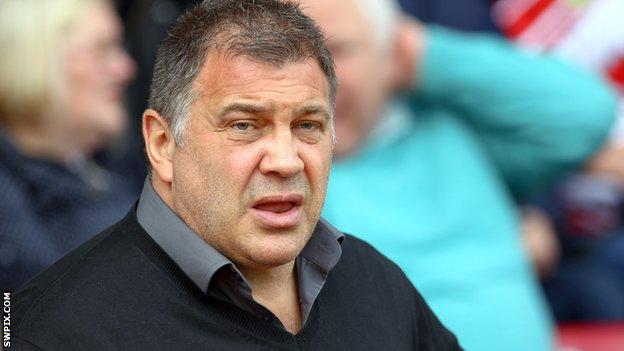 Wigan Warriors head coach Shaun Wane has promised to continue to introduce new youngsters to the team before the end of the season.

Ryan Hampshire and Lewis Tierney, both 18, made their first-team debuts in the 33-32 win at Widnes on Friday.

Full-back Tierney, the son of rugby legend Jason Robinson, marked his first appearance with a try.

"There are people who have not made their debuts yet but will and I can't wait to do that," said Wane.

"The form and the spirit in the club allows me to be able to put those kids in. The average age of that team is 21 which is probably the youngest team we've ever put out in the history of Wigan, so they've made their own bit of history.

"The way we treat our kids they won't be getting carried away and there is no way they'll be getting above their station."

The narrow win at the Stobart Stadium, together with Huddersfield's loss at Hull KR, means Wigan now sit five points clear at the top of Super League ahead of the Giants.

"With Huddersfield losing it makes it all the sweeter and the way we got it I was really impressed," Wane told BBC Radio Manchester.

"To do that with the young kids and two debuts and obviously George Williams, making his second game, I'm really pleased we got the two points.

"I thought Ryan off the bench was really, really good and I thought Lewis out the back made one error, but apart from that he was outstanding.

"He was tested but I think he came through everything really well and he showed to me that I can trust him in big games."

Wigan forward Sean O'Loughlin meanwhile has withdrawn from the England squad for the match against the Exiles on Friday with a recurrence of a knee injury.