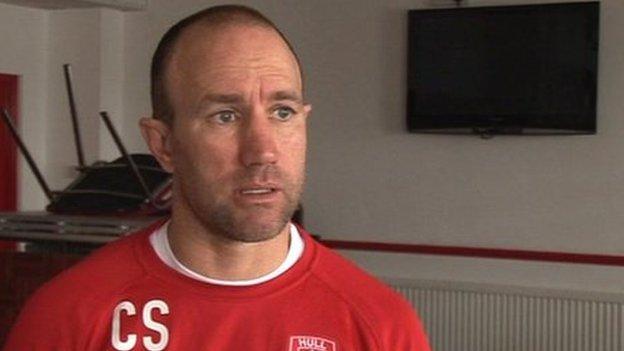 The Australian, who arrived from Newcastle Knights to replace Justin Morgan in 2011,

"I'm glad that the contract situation is sorted now," the 44-year-old told the club website.

"I can concentrate on continuing with the job that myself, my staff and the players have started."

Rovers missed out on a play-off place in Sandercock's first season in charge, but are currently on course for a top eight finish this term with eight rounds to play.

Sandercock's work with Manly Sea Eagles and Newcastle Knights earned him the chance to take on a head coach role when he replaced Justin Morgan for the 2012 campaign.

He and Hull FC coach Peter Gentle - who came from Wests Tigers - both arrived in Super League after extensive experience as assistant coaches.

The duo are two of five non-European coaches in the top flight, along with London's Tony Rea, St Helens's Nathan Brown and Warrington's Tony Smith.

Winter arrivals Cory Paterson and Travis Burns have shown promise in Super League, while the development of academy talent such as Jordan Cox, Keal Carlile and Liam Salter has impressed the club's hierarchy.

"Some of those young players are starting to claim first team spots and hold those spots and that's what we need to do.

"We see the future of Hull Kingston Rovers with a lot of local lads playing, a lot of English lads and a handful of overseas players that will complement the team."

Smith, who revealed the delay between the contract offer and Sandercock signing was because of discussions with the Rugby Football League regarding salary cap and spending regulations, defended the decision to award a one-year deal.

"You've got to look at where we are, Craig needs to know what were doing long term, there's been some uncertainty about the club and it gives us another year to work with the staff that Craig has got.

"Craig will want to bring in some players on contracts so it seemed like a sensible fit for both parties really," Smith added.