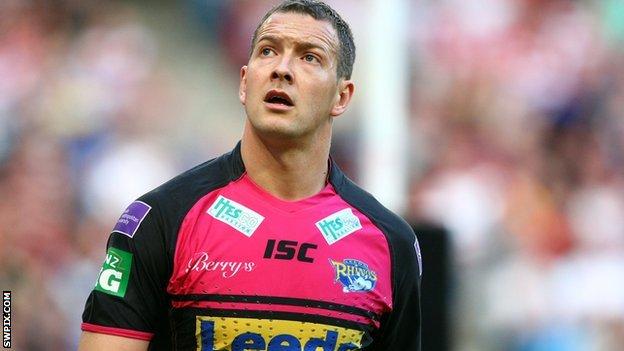 Leeds Rhinos half-back Danny McGuire has been ruled out for the rest of the Super League season with a broken leg.

McGuire, 30, who has scored five Super League tries this season, suffered the injury in the defeat by Hull FC.

Head coach Brian McDermott told the club website: "This is a bitter blow for Danny and the team.

"We had hoped he would be back sooner rather than later but the scans were not good news and it is going to be a lengthy lay-off."

McDermott added: "Danny has been in this situation before and I know he will be able to handle it mentally but it is certainly a blow.

"Our medical team will give him the best possible support and I am sure he will be working hard to get back to full fitness."

The England international has been ruled out for up to four months meaning he is now unlikely to be fit in time for this autumn's World Cup.

The World Cup starts on 26 October when England take on Australia at the Millennium Stadium.