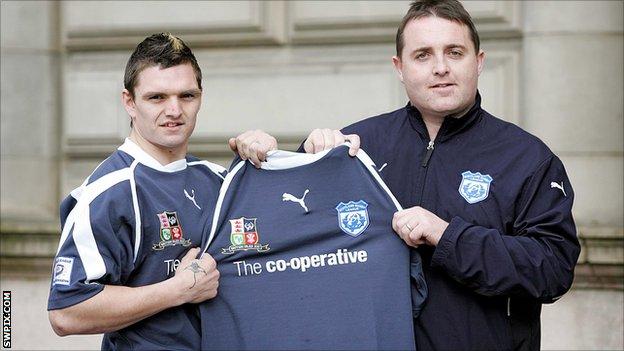 Scotland head coach Steve McCormack believes Danny Brough's decision to commit to his squad for the 2013 World Cup has been a long-considered one.

Huddersfield Giants playmaker Brough, 30, and will be available for Scotland.

"He's been thinking about that for a while," the former Widnes and Swinton coach told BBC Radio Merseyside.

"He captained us at the last World Cup and knows exactly what we're about."

McCormack added: "Any coach, World Cup or club, wants the best players to pick. Danny's been a great servant to Scotland for near on 10 years. He's put his hand forward, played exceptionally well and been an ambassador for us on and off the field.

Scotland at the World Cup

"I've kept in touch with Danny for quite a few years now and certainly over the last 12 months and for him to put himself available is fantastic.

"When we start selecting that squad, to have someone like him available is superb for us."

The 27-year-old has made 136 NRL appearances in addition to State of Origin representative rugby, and almost joined the ranks for the last tournament before injury,

"He's an outstanding player, played a lot in the NRL and played exceptionally well," McCormack added.

"Knowing him as I do and speaking to people who know him, it'll be fantastic to have him in and around our squad."