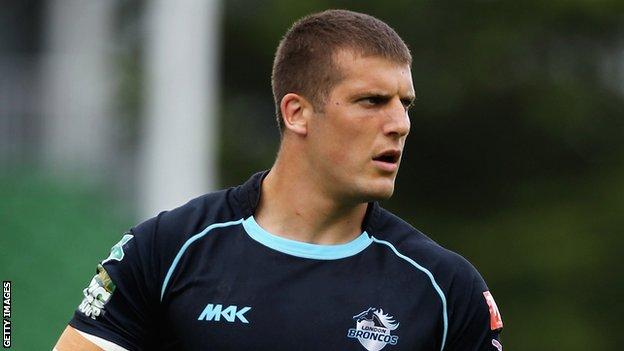 London Broncos forward Tony Clubb says he is proud to have taken over as captain of the Super League side.

The 25-year-old England international took on the role last week after Craig Gower stood down.

Clubb told BBC London 94.9: "They asked me and I happily accepted. It was a bit of a shock but it was a proud moment for me and my family.

"I had never seen myself in that light. I have never captained any team at any age. This is the first time."

He added: "I went out on the field, did my job and that was it."

Tony wears his heart on his sleeve and will be a good leader. He is a tough competitor and I know the boys will get behind him and help him out

Clubb returned from seven weeks out injured to skipper the side for the first time in last Saturday's 30-30 draw with Castleford Tigers.

Gower, who left the Broncos by mutual consent this week and is set for a move to NRL side Newcastle Knights, has given his backing to Clubb.

"He wears his heart on his sleeve and will be a good leader.

"He has the respect of the guys, has played for England and it will be a good challenge for him as a player.

"He is a tough competitor and I know the boys will get behind him and help him out. It will help him grow as a player."

Clubb does not think that the captaincy role will change his style too drastically.

"Nothing changes for me. I'm still the same old person who likes to joke about.

"As before, I will give my all. I want to be my own captain and my own person.

"I will put my own spin on things and hopefully everyone will buy into that and get behind me."