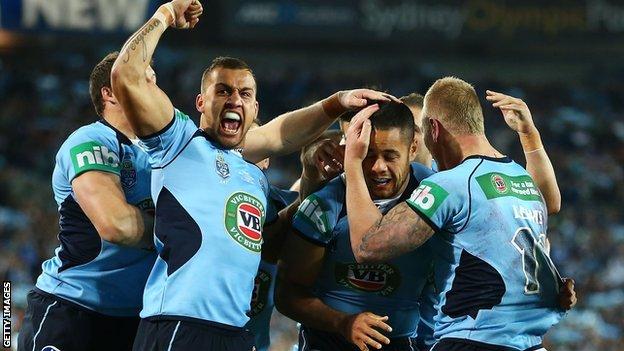 New South Wales beat Queensland in the opening game of this year's State of Origin as they attempt to win the series for the first time since 2005.

James Maloney kicked three goals as NSW scored all of their points in a first half that ended with rival forwards Paul Gallen and Nate Myles brawling.

"New South Wales came out a million miles an hour and we couldn't stick with them."

But the Maroons could not add to their tally as NSW, coached by rookie Laurie Daley and skippered by Gallen, took a big step towards ending Queensland's grip on the series.

Hayne struck early after collecting a sharp inside pass from second-rower Luke Lewis, while Jennings beat five opponents as he scored a superb solo try five minutes before the break.

Boyd and centre Justin Hodges both threatened the Blues line in the opening half, while Smith had a try ruled out for a double movement after the restart.

"New South Wales came out a million miles an hour and we couldn't stick with them," said Queensland skipper Sam Thaiday.

Gallen, though not placed on report for his part in the brawl, was handed a Grade 2 striking charge after he led with a swinging arm in the ruck and then threw punches but would only miss one game - for club side Cronulla - if he submits an early guilty plea.

The second match of the series will be in Brisbane on 26 June and the third in Sydney on 17 July.