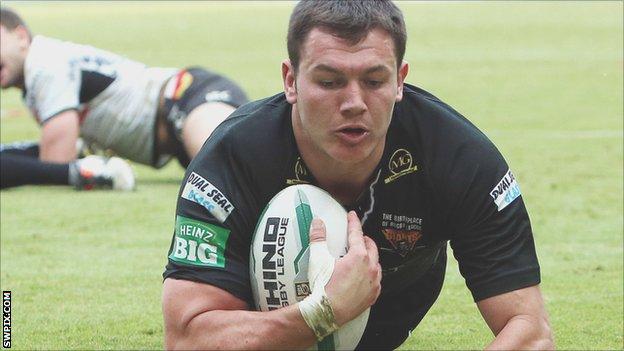 Huddersfield back-rower Brett Ferres has been called into the England squad for the International Origin fixture against the Exiles on 14 June.

The 27-year-old has scored eight tries in 16 games this season for the Giants.

Wakefield winger Ben Cockayne is also left out from the

Ferres' club team-mate prior to Steve McNamara's announcement, having failed to earn selection for the Autumn tri-series in 2012 and the Elite squad.

"It's a nightmare. I'd rather it wasn't going on, but there's never a good time for the RFL to pick the timing of this game.

"I'll support Steve McNamara and the England team as much as I can, but from a selfish point of view it is harmful to the club when I've got so many players, who could have been rested, playing in that game."

"We have been unfortunate with the injury list," added McNamara.

"However there is continuity about the squad make-up. We will reward those players that have been part of the programme over the past couple of years.

"They continue to be the most consistent performers in the Super League each week, which is testament to their qualities as rugby league players."

Wigan and Leeds have contributed five players each to the England squad, with Warrington providing four, and are likely to provide further strength to the Exiles pool.

and has form in the fixture after he led the side to success in 2011.

As Australia and New Zealand select their national sides from their domestic NRL league, the Exiles competition gives overseas players in Super League the opportunity for representative rugby.

The two sides shared a win apiece in last year's two-game series, while this season's match is preparation for the forthcoming Rugby League World Cup which begins in October.

"The International Origin will be the perfect test for us," McNamara said,

"Since its inception two years ago, the matches have been intense affairs. The Exiles will want to upset our plans and our players know they will be in for an battle. It should be a cracker."