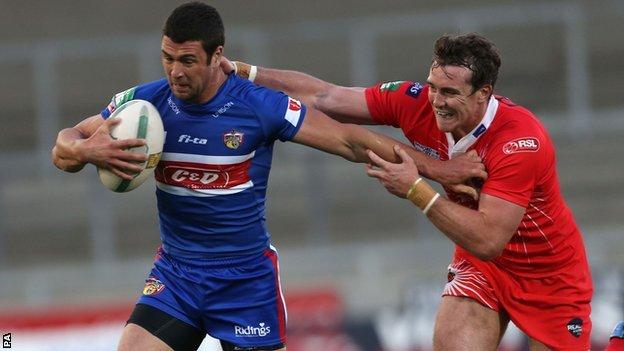 Wakefield ended a run of four straight defeats as they beat Salford to climb a place to 10th in Super League.

Salford took the lead with an early try from winger Danny Williams.

But Trinity hit back to lead 30-4 at half-time with tries from Paul Aiton, Danny Kirmond, Dean Collis, Richie Mathers and Paul Sykes.

The visitors added three more after the break, from Oliver Wilkes, Ben Cockayne and Peter Fox, Lee Smith landing seven out of his eight pots at goal.

Salford did score the try of the night, Jodie Broughton's late 90-metre interception effort, converted by Lee Gaskell, who had missed his earlier effort from the touchline.

But, coming on the back on last weekend's 68-10 defeat at Warrington, that was little consolation for coach Brian Noble, whose team have now shipped 20 tries in two Super League matches.

And, by then, it had already proved too much for Salford's ambitious owner Marwan Koukash, who was so upset by the Reds' first-half performance that he stormed into the dressing room to witness Noble's half-time talk.

The two sides drew 23-23 when they last met back in March, but this was a different story, as Wakefield recorded their biggest win of the season.

The Wildcats had eight different try-scorers as they ended their bad run in emphatic fashion, bossing the exchanges up front and allowing half-backs Paul Sykes and Tim Smith to run the show on their return from injury.

And Noble made it clear after the match that he is ready to drop players after losing patience with his under-performing team.

"I'm pretty clear about where we want to go to. There is a lot of uncertainty in the camp in relation to futures and that will be sorted in the next few days.

"I've only been here six weeks - but it feels a lot longer after tonight. I clearly have to formulate a way forward for the people who might not be here next year.

"A lot of people didn't show up in the manner that we practised this week.

"I'm extremely disappointed. Shows like that can appear gutless. Some of the soft tries are hard to accept. But, technically, they kicked far better than we did. "

"I'm really happy. We felt it was a must-win and I'm pleased to get that win.

"I felt we started a little bit slow but the first try calmed our nerves and overall we won the physical contest. It's a simple game sometimes. We carried the ball into the Salford line and it gave us enough of a platform.

"Those half-backs playing well is vitally important to us. We missed Paul Sykes when he was out and I thought Timmy ran into confidence as the game wore on.

"Once we got a bit of daylight, the confidence returned to his play and for one of the tries in the second half he was pure class."